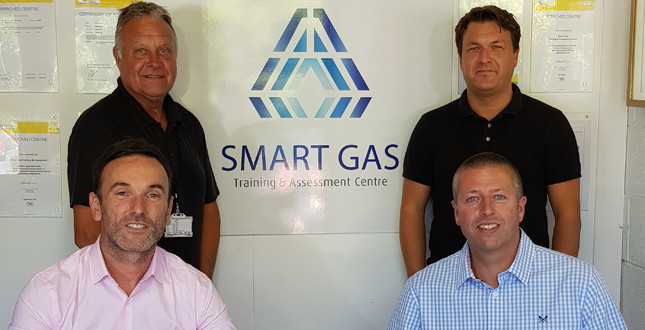 HVP Editor Joe Dart speaks to Smart Gas Training & Assessment about why it has launched an initiative to provide plumbing training to pre-16s in Derbyshire.

It was back in 2016 that Patrick Sullivan and John Grocutt took the decision to set up their own training business, after over a decade working together as plumbing and gas lecturers at a local college. They launched Smart Gas Training & Assessment as co-directors, with the company’s first training centre in Ashbourne, Derbyshire, opening in early 2017.

“The challenge of developing a centre of our own that could incorporate training to meet the demands and requests of the industry was something that we both knew we could offer to a high standard without the constraints of additional duties that could sometimes detour from the day to day delivery when working at a larger establishment,” explained Patrick.

Smart Gas Training is taking a different approach from most other training providers however, as it is now delivering plumbing education for pre-16s in the local area. Patrick says it was never part of the business plan to offer pre-16 qualifications, but the idea was formed as the result of engagement with some of the employers the firm worked with.

In January, the company invited a number of local businesses to provide feedback about the quality of plumbing education in the area. The response from the employers revealed that the majority no longer took on apprentices straight out of school.

Patrick explained: “What we’re finding is that employers take on school leavers for apprenticeships, but it’s a bit of a culture shock going from school straight to an apprenticeship on a building site, so a lot of apprentices fall by the wayside.”

In addition, employers found that many school leavers didn’t have the correct skills or attitude to be successful in the trade.

“The key [attributes] that they said the school leavers were missing were presentation, time-keeping, and basic practical skills and initiative,” he added.

Part of the issue has been a total lack of opportunities for local students to learn about plumbing while at school, says Patrick. Smart Gas Training surveyed local colleges to find out whether they offered plumbing training for pre-16s. The answer was a resounding ‘no’, and the company found that there weren’t any colleges within a 40-mile radius who offered this opportunity.

Launching the pre-16 courses was a no-brainer given the feedback the firm received from local employers and the dearth of education provision in the region, but Patrick is also passionate about the need to educate pupils from an early age.

“Schoolkids should be given that opportunity to experience what it’s really like before they read all the glossy stuff about [how much they can earn],” he said.

Following an assessment period, Smart Gas Training contacted a local school, Queen Elizabeth’s Grammar School in Ashbourne, to explain the work it was doing to promote pre-16 learning. The company proposed running a course which would give pre-16s an introduction to the trade, which had been developed in conjunction with local employers.

The school accepted the proposal and, between April and July, the company ran a bespoke introduction to plumbing course. Eight Year 10 students were enrolled on the course as a trial, which ran for half a day every week.

The training course covered a number of key areas, including:


The course proved successful enough that the school has committed to a Level 1-accredited plumbing course from the 2018/19 academic year, which will run one day a week over the course of the year.

That’s not all, however, as there are also intentions to provide an entire pathway to apprenticeships. Smart Gas Training is currently seeking Level 2 delivery status for its centre, with an aim to provide a Level 2 course next year, as well as work experience and apprenticeships with local employers.

Expansion plans are also on the cards, and Patrick confirms that the business has entered discussions with another local school about adding the course to their curriculum.

“We are going to offer our Level 1-accredited course to all of the schools around this area, so I think we’ll have some take up on that this academic year,” Patrick concluded.