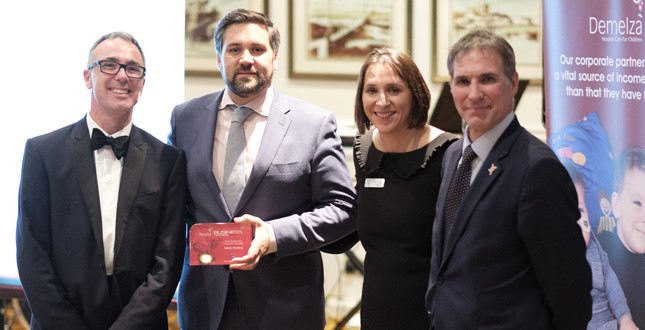 Swale Heating has been presented with the Gold Outstanding Corporate Supporter award at the Demelza Business Awards 2017 for its continued partnership with the children’s hospice charity.

Earlier this year, Swale Heating made a donation of £26,000 worth of TV advertising airtime to give the charity the opportunity to promote their services on mainstream television for the first time. It was seen approximately 42,000 times a week, helping to increase awareness of Demelza’s work, and encourage donations from a wider audience.

Swale Heating Sales Director Matthew Edwards said: “We were humbled to be considered for the award, let alone win. We’re immensely proud of our work with Demelza, and the groundbreaking steps taken this year to get a Demelza TV advert on air across London and the south east. We will continue to donate airtime to allow Demelza to broaden their reach.”

The Demelza logo is featured across Swale Heating’s advertising material, including a recent campaign on the London transport network, while also being displayed prominently on its fleet of vans.

Ryan Campbell, Demelza CEO, said: “Everything Demelza has and everything we do is a product of the generosity of the community. It has been a great year for Demelza as we continue to grow and expand our services, reaching more children and families. We really couldn’t do this without the continued help from all of our outstanding business supporters, like Swale Heating.”