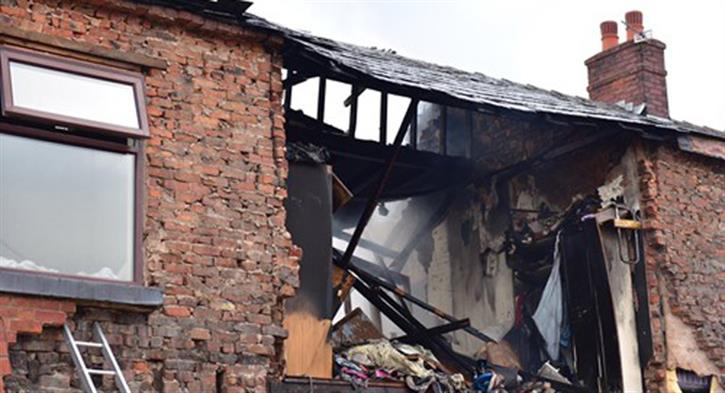 A suspected gas explosion has caused a house to collapse in Ashton-under-Lyne, Manchester, this morning, leaving at least 10 people injured.

Greater Manchester Fire and Rescue Service (GMFRS) was called to the terraced property in Curzon Street just after 5am, where the explosion had caused the property to collapse at both the front and the back.

The casualties have all been taken to hospital.

GMFRS station manager Alan Ashworth, incident commander at the scene, said: "We were called initially to a fire and when crews arrived there were a number of people injured on the floor and it was obvious there had been an explosion in the house. We helped them but they were later treated by paramedics from North West Ambulance Service while we tackled the fire using covering jets.

"We are now aware that there are at least 10 casualties. Some are suffering burns and lacerations. We don't have full details of the casualties, but we now know three people were inside the property at the time of the explosion. Some people were also injured while helping to rescue people. We had one person who brought a mattress for one of the casualties to get out.

"We have stabilising equipment on both sides of the building as there is a potential risk of collapse. We are aware of two collapses so far and therefore are trying to prevent another.

"We don't yet know the cause of the explosion and our fire investigation team are at the scene working with the police."

Neighbours in Curzon Road have told the BBC that the explosion was "like a bomb went off - it woke the whole street".

Gas and electricity supplies have been turned off at the house and at four neighbouring properties.

All pictures are courtesy of the Greater Manchester Fire and Rescue Service (www.manchesterfire.gov.uk).