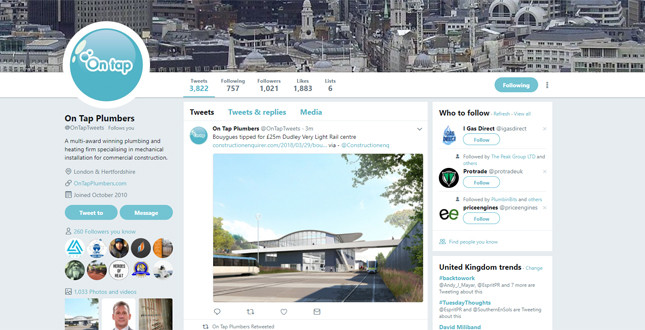 Anne Timpany, Director at On Tap Plumbers, explains how social media is changing the way that plumbers interact with one another.

When we decided to increase our social media activity a year ago, we had no idea that we would discover such a big proactive digital community of domestic plumbers talking to each other on the internet.

We found that Twitter is buzzing with interactive plumbing activities, from those who proudly display their work, or things that have not gone so well, to competitions, as well as having to repair inherited disasters from other plumbers.

For the APHC’s Quality Plumber Week, the plumbing ‘Twittersphere’ went crazy, and it was great to witness so much online support for such an important campaign. It really brought the domestic plumbing industry together.

The plumbing community has organically created a big public forum for news, views, and advice. It’s the same as any business network, but it’s digital, and probably more effective at enabling people to connect with each other, as well as being an infinitely cheaper option than the more traditional networking groups which often require expensive subscriptions.

We have found that on Twitter plumbers really look out for each other on a daily basis, and interest is not just confined to plumbers – a lot of the plumbing and construction media find it an invaluable source of information and contacts.

At On Tap Plumbers, we have also found that Twitter especially has been great for recruitment too, but it’s not our only social media channel.

It’s important to have a Facebook page for your business, and maintain a presence on the site, even if you don’t do much with it. If someone local to you is searching on Google for a domestic plumber, having a Facebook page definitely gives you more visibility. Also, consider your Facebook local communities, whether that’s a mums’ group, the local Chamber of Commerce, or a group of senior citizens who communicate online with each other. Being tagged by any of them can lead to useful referrals.

At the very least you’ll be joining a community in which you can have a voice, enjoy the stories from other plumbers who you can relate to, and feel part of a supportive team, even if you are a sole trader.