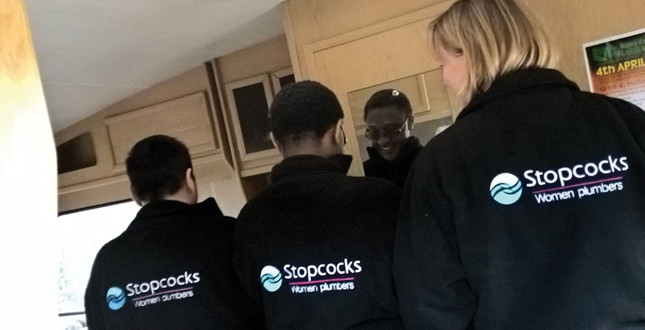 In the face of a lack of gender diversity in the industry, Hattie Hasan, founder of Stopcocks Women Plumbers, explains how women can join together to begin a long overdue change.

I became a self-employed plumber because no one wanted to take on a female trainee. Almost 30 years later and the numbers of women in the industry, an estimated 1% of plumbers, have hardly changed even though Stopcocks Women Plumbers receive frequent enquiries from women wanting help to get started in the industry.

So, what are the issues facing women, why should they enter the industry, what can they bring to it and what needs to be done to help them stay?

When I started, there wasn’t even a women’s toilet available to students in my college, and I had to use the female admin staff loos. Now, there is a steady trickle of women training as plumbers, but there’s still usually just one or two on a course, if any, and many go through their career never meeting another female plumber.

This is further complicated by age. Although there are now young female trainees coming to college straight from school, the majority have not thought of it, or have even been put off it at school.

One student even reported that her career advisors told her she’s ‘too good’ to go into plumbing.

Most women don’t start training until after 24, which makes the issue more difficult in many ways. No funding is available for training, it’s more difficult to get placements due to family commitments, and potential employers cannot give the flexibility needed for women with families.

So, not only do these women find themselves the only woman in the room, they’re probably considerably older than the majority of trainees too. Apprenticeships are without doubt the ideal way to gain proper skills and competence but, it appears from stories we have heard, many plumbing firms can’t see women fitting in to their business.

There are notable exceptions, and some genuine and excellent advocates for women plumbers, but sadly we still get stories about vandalised portfolios and social media abuse.

Though these occurrences are rare, even one story like this added to the aforementioned difficulties is enough to put many female would-be plumbers off a brilliant and lucrative career choice. The women who get past this are clearly very committed to the trade, and those who encounter them are usually full of praise for their plumbing skills.

In the run up to our second Women Installers Together (WIT) Conference, taking place on 4 July in London, I’ve been talking to industry representatives, and together we are beginning to witness a sea change. Not only has the conference attracted sponsors from the manufacturing sector, but also from those who could have a real influence on the number of women plumbers by taking on apprentices.

Supporters include Polypipe’s PR and Branding Manager Becky Appleyard-Kelly, who said: “Unless you have different perspectives and viewpoints, you’re never going to find solutions that suit everybody. If you’re ignoring the ideas and enthusiasm of half the population, you can’t possibly be modern.”

Fellow supporter, and Redrow Homes New Entrant Programmes Manager, Clare Hindley said: “In 13 years, I’ve only ever met one female plumbing apprentice but, by working together, we can look to increasing that number.”

I created the Stopcocks franchise because of the number of women contacting me with nowhere to go. My aim is to create competent, confident and successful self-employed Stopcocks Women Plumbers who, simply by existing, will be role models for the younger generation. It is through being visible that plumbing will be seen as a viable and attractive career for women, and isolation will become a thing of the past.

Nobody expects that everyone can walk straight from college into self-employment. Self-employment is not for the faint hearted, so through our continued work over the past three years, we have also been able to forge relationships with companies who welcome female apprentices, many of which will be at the conference.

Hattie Hasan will be speaking at the WIT conference in July. To book your free ticket for the event, head to: www.stopcocks.uk/event/women-installers-together-2018/