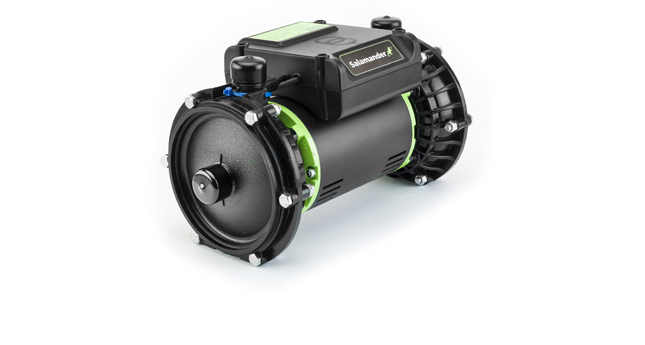 Salamander launched its new Right Pump label range at PHEX+ on 17 May, after re-engineering its centrifugal range of shower, bathroom and whole-house pumps.

The new range replaces its former ESP, RHP, RSP and RGP range, with much of the redevelopment has been done in response to installer feedback. New benefits include a reduction in noise, the use of crossover technology to allow the former RSP 'shower only' pumps to power the whole house, and the inclusion of a 'spiders' web' design to strengthen the plastic end caps and further enhance strength, rigidity and reliability.

Independent testing has shown that the RP50PT is the quietest twin-ended plastic shower pump available on the UK market.

On the universal variants of its Right Pumps, Salamander has also improved the electronic system protection which guards the pump against damage from the three most common faults that cause damage to pumps - dry running, excessive heat and leaks in the system.

Salamander's technical director Gareth Richards said: "Our research and development team have spent over five years overhauling the product range, developing cutting edge technologies that are new to the pump market, and combining that knowledge with feedback from installers and householders.

"Some of our customer data showed that having such a wide range of pumps was making it more difficult to choose the right pump for the job, so the launch of Right Pump means a simplified range with clearer product names to help installers. It also involves advanced technology incorporated into every product, and a new look that is more in keeping with our brand and modern product design.

"Essentially, we are delivering upgraded pumps at the same price, but with added functionality. Whether the need is to power a single shower or a whole house, there is now a Right Pump to solve the problem."