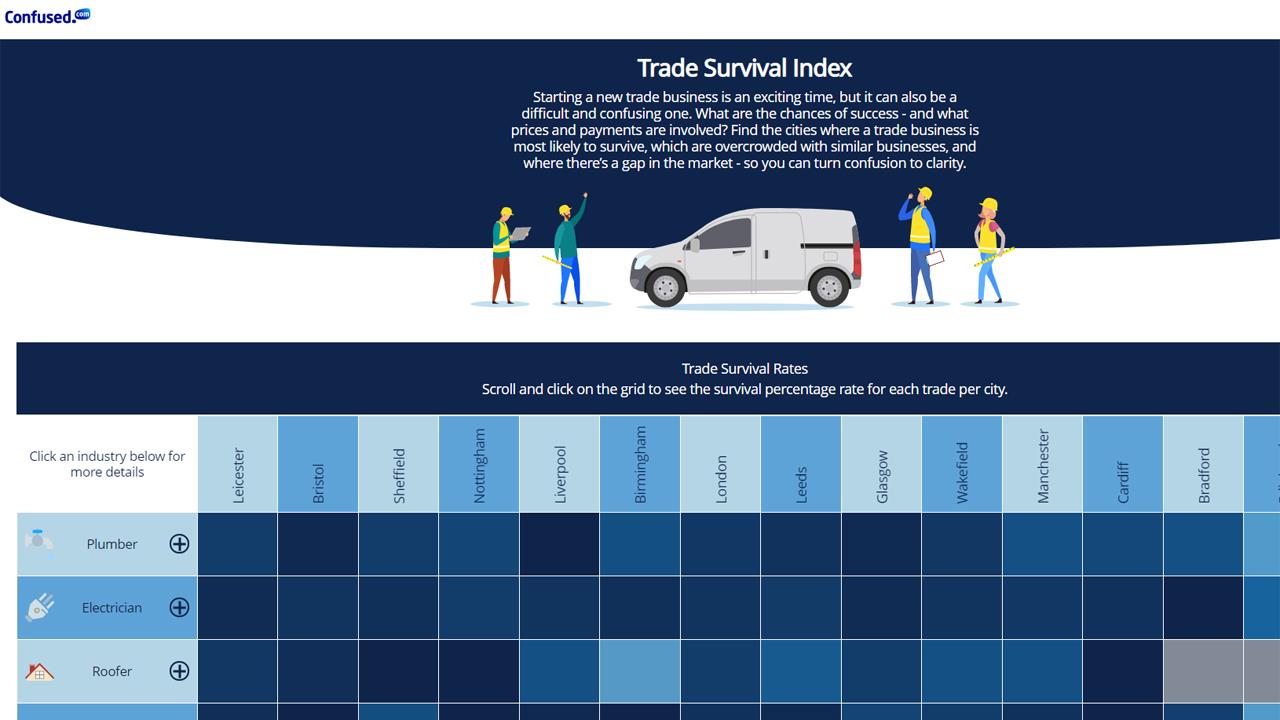 According to new data from Confused.com, dubbed the Trade Survival Index, 77% of trades businesses across the UK survive beyond two years, on average, but those in some cities in the UK have a better chance of thriving.

For anyone looking to start a trade business, the Midlands is a promising option, according to the Trade Survival Index. Meanwhile, Leicester, Nottingham, and Birmingham are all within the top six areas based on business success rate.

In particular, Leicester is revealed as the city with the highest rate of success as, according to the data, less than 10% of all trades based in the city fail, on average.

The UK’s capital emerges as the trade start-up hub and most competitive region. There are 7,649 trade businesses in London, 141% higher than the average UK city, with an average survival rate of 84.1%. Meanwhile, Cardiff has the fewest number of competing trade businesses in the UK (1,457), suggesting it could be one of the best cities for a start-up.

The study reveals that the most secure trade professions are electricians and double-glazing installation businesses – both of which have an average survival rate of 89% after two years.

Electricians also receive the highest day rate of £215. While electricians require a relatively steep van insurance policy of £1,183, the high rates mean they also have the largest profit margins – approximately £181 a day.

Double-glazing installers, meanwhile, might share the same survival rate as electricians, but a £150 day rate means their margins are much lower at only £119 a day.

When making a plan for a new trade business, financial considerations including income rates, van insurance, and running costs should be factored in, says Confused.com.

The company’s research shows that electricians charge the highest daily rate at £215 on average, followed closely by plumbers at £210. Gardeners have the lowest running costs of all trades at just £56.15 – that’s more than 2.6 times less than electricians at £184.24.

Van insurance varies by trade, even between similar work – landscape gardeners pay £1,424 a year on average (the highest insurance cost), while other gardeners pay only £1,392. Trades with the cheapest van insurance include painter and decorators (£870) and double-glazing installers (£889), while contractors sit just under the median cost, paying £1,064 a year.

Builders have the highest public liability insurance at £278 a year, higher than plumbers (£217) and carpenters (£126). Electricians pay the least at only £81, contributing to their high profit margins.

Across all trades, the average cost of marketing, which includes running a two-week bus stop advert, a one-off local newspaper advert, and a radio advert over one to two months, would be £26.71 each day on top of running costs.

Amanda Stretton, Motoring Editor at Confused.com, commented: “Starting a business comes with a lot of risk and pressure. And our investigation shows that the success of a business could come down to the location.

“But where is best? To clear this confusion we’ve highlighted the cities in the UK with the best rate of success for different trades, and perhaps where to avoid.”

CITIES COM CONFUSED DATA INDEX RESEARCH STARTUP SURVIVAL TRADESPEOPLE UK
Tweets by HVP
Make sure you’re on top of changes in the industry, and sign up for free to receive your monthly copy of HVP and our weekly email newsletter
SUBSCRIBE TO NEWSLETTER
SUBSCRIBE TO MAGAZINE