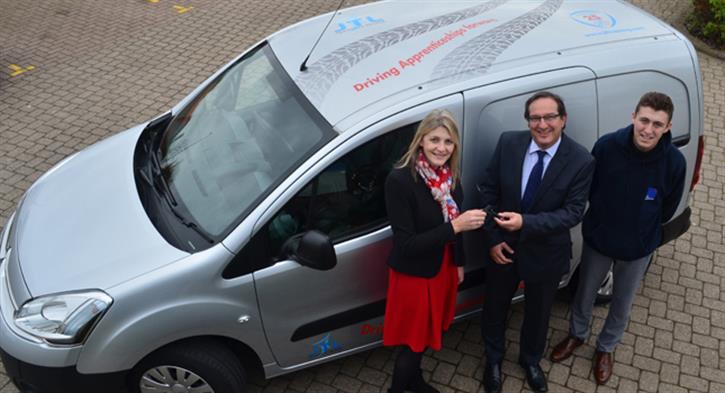 The winner of a new van has been revealed by training provider JTL, which staged the competition as part of its celebrations marking 25 years in existence.

All companies with a graduating or new JTL apprentice within the year were entered into the competition.

The winner of the 25th Anniversary Prize Draw was PK Engineering from Carlisle, a family business that started life in the 1980s that was represented by office manager Denise Pape and apprentice Niall Keyes, whose recruitment helped make PK Engineering eligible for the competition.

The pair attended JTL’s National Centre in Birmingham to collect their prize.

The owner of the business, Kevin Percival, said he was over the moon to hear of the company’s success in the prize draw.

Mr Graham said: “We took the decision to give this fantastic prize away in our silver jubilee year as we wanted to give something back to the building services engineering sector in which our employers and apprentices work and thrive.

“These are exciting times for apprenticeships, and at JTL we’ve been delighted in the last year to achieve in excess of 2,000 new apprentice starts, with 6,000 current apprentices in total on our books.

“Among these are the apprentices of PK Engineering that are currently studying with us, making them a thoroughly deserving employer to win our prize draw. I’m delighted to hand over the keys to the van and hope it brings PK Engineering and its apprentices many thousands of miles of happiness.”

“We’re delighted to win this prize,” said Ms Pape. “We didn’t really believe the telephone call we had telling us we’d won it – we were sure it was someone having a laugh. But it really is an excellent prize and we’re immensely grateful to have won it.

“The news that we have the new van arriving has seen many of our team suggesting that it might be best if they had it – we’ll see about allocating it when we get back to Carlisle. But it will get well used in the months and years ahead.”

PK Engineering has been in operation for more than 30 years and currently employs a team of 48 staff. The business has grown rapidly in the past couple of years and is seeing encouraging growth in the marketplace, particularly in the past twelve months, it says.

While it operates predominantly in the Cumbia and Scottish border areas it has teams working around the UK on projects, as far south as Devon.

The company works in the commercial sector and as well as the M&E Division, has a controls division and a fire and security division.

PK Engineering currently employs ten apprentices, including four it has taken on this year. Its apprentices stay with the business and move on to positions of responsibility within the company once they qualify.

The company says it is convinced that working with JTL has always brought huge benefits, something of which they are even more convinced now they have won the van.