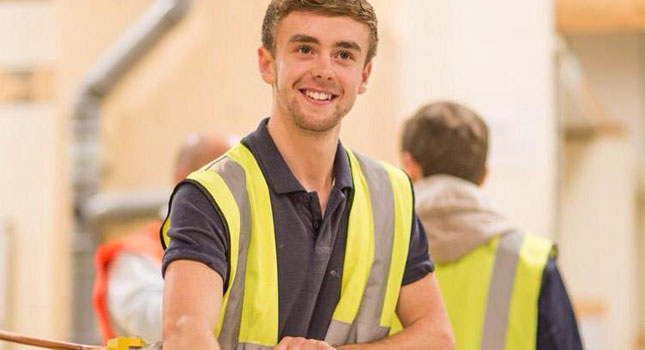 Exeter resident Josh Ellis has been awarded the title of the South West’s 2015 VQ Learner of the Year, in recognition of his outstanding achievement completing a vocational qualification in plumbing at Exeter College.

Mr Ellis, 21, won the gold medal at the World Skills competition, with his work deemed “near perfect” by the judges.

He has since progressed to a level three plumbing qualification and become the main installer for his company due to the exceptionally high standard of his work.

He is juggling high demand for his work with studies at college, and recently won the college’s ‘Apprentice of the Year’ award in recognition of his hard work.

Mr Ellis beat strong competition from two other shortlisted learners from the South West to be named the overall regional winner.

Taliya Hussain, 18, excelled on her childcare, learning and development course, undertaking a variety of placements throughout the community.

Lee Thorne, 35, from Bridgewater College, was highly commended after overcoming a host of personal struggles to become a business and professional studies training officer, supporting other learners.

All the regional winners from across England will be invited to an awards ceremony in London on 9 June, 2015, where the overall national winner for VQ Learner of the Year, sponsored by OCR, will be announced by garden designer and television personality Diarmuid Gavin at the event.

Mr Ellis said: "I'm thrilled to have been named as the South West regional winner of this year's VQ Learner of the Year Award. Completing a vocational qualification has given me the skills and drive to pursue my chosen career and I am delighted that my hard work has been recognised. I would highly recommend vocational learning to others and I hope VQ Day inspires others to explore the wide range of training options and choose a path best suited to their individual skills and interests.”

Held on 10 June, 2015, VQ Day is an annual event led by independent education charity, the Edge Foundation. It celebrates the benefits of technical, practical and vocational learning, not only to the individual but also to their communities. From 16-year-olds to those over 60, VQ day supports the acquisition of new skills and encourages the uptake of high quality vocational courses.

David Harbourne, acting chief executive officer of the Edge Foundation, said: “Josh is a great example of how practical, technical and vocational qualifications can be the catalyst for a successful and fulfilling career. We wish him the best of luck ahead of VQ Day and in the future.”