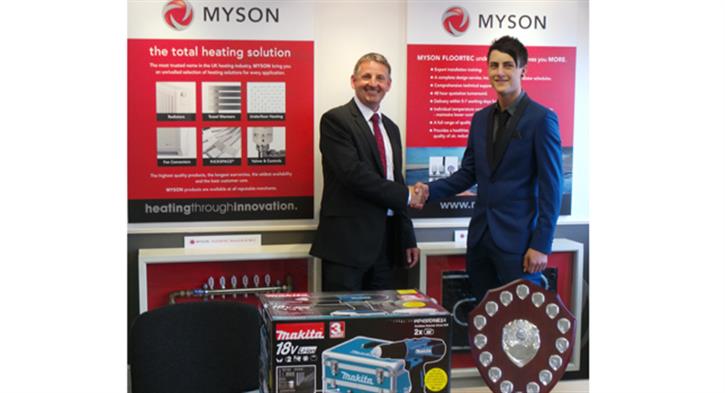 The first winner of the Myson Young Apprentice of the Year Award has been named as Alex Bilclough, a plumbing student at Newcastle College.

The Award recognises outstanding commitment to work and study on the plumbing course at Newcastle College, and was given to Mr Bilclough for his terrific results and hard work for the John N Dunn Group, Myson said.

Kelly Smith, product manager for radiators at Myson, said: “Alex has been a runaway success during his time at Newcastle College and the team agreed unanimously that he should be the winner of the Myson Young Apprentice of the Year Award.

“From scientific principals in plumbing, to central heating systems, Alex was regularly getting in excess of 90% in assessments, as well as putting his skills to good use in the workplace.

“As a result of his outstanding results Alex has also put himself forward to represent the North East in a skills challenge and we wish him every success.”

Mr Bilclough joined Myson at its office in Team Valley, Gateshead, for the presentation of the award, which was made by regional sales manager Nigel Stedman. As a reward for his hard work and dedication Myson gave Mr Bilclough a Makita drill and range of accessories that he can use at work.

“The Myson Young Apprentice of the Year Award is a great incentive to work hard and winning it was completely unexpected,” said Mr Bilclough.

“Throughout my apprenticeship I’ve just focused on doing the best job that I can and this has been reinforced in the workplace – after all you want to do the best possible job for customers.”