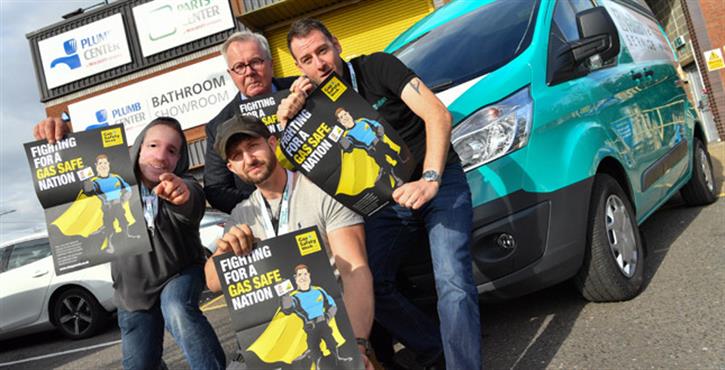 The road trip team consisted of Peter Booth, Heating Installer of the Year (@PBPlumber on Twitter), Tim Pollard, Head of Renewables at Wolseley (@LeamingtonSBC on Twitter), Simon Whysall, Sales Director at Vaillant (@S1Whysall on Twitter), and the mysterious Twitter deity himself – @GasManGod.

Last year, the #RegardTheCard campaign launched on Twitter to raise more awareness of the Gas Safe card and the need for installers to lead the charge on gas safety awareness. This year the road trip team took the cause face-to-face at Wolseley Plumb Center branches in Ilkeston, Nottingham, Mansfield, Tamworth, Burton and Derby.

Peter Booth said: “The welcome we received in branches was great. It made me feel privileged to be encouraging my peers to promote their skills to homeowners. A skill that only they can do legally and should be commended for.”

During the tour, Wolseley Plumb Center quizzed installers on whether they think homeowners are aware of the risks of using an unregistered gas engineer, to which more than half of respondents on the road trip said “not aware”.

Tim Pollard commented: “Gas safety is not an option, it is a necessity and the only people who can assure that outcome are Gas Safe-registered installers. I was lucky enough to be part of the Gas Safety Week roadtrip organised by Peter Booth, Simon Whysall and the almighty Gas Man God, together with Vaillant and Plumb Center.

“The joyous blend of branch visits and outbound calling to installers was both great fun and highly effective in raising the profile of important issues. Personally, I would love this to become an annual pilgrimage!”