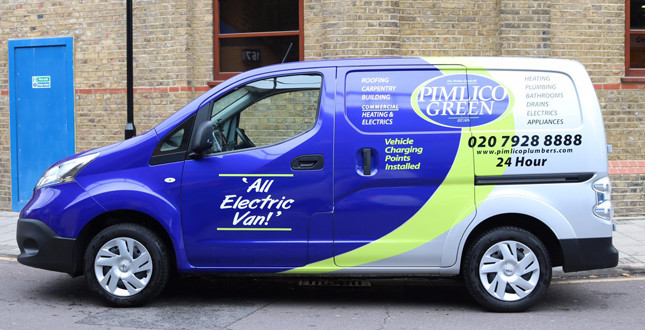 Pimlico Plumbers launched its first fully-electric plumbing van on the day the Mayor of London put £300,000 on the company’s annual costs with the introduction of his new ‘Toxin Tax’.

The T-Charge will cost motorists and companies operating vehicles that fail to meet minimum exhaust emission standards in Central London an additional £10 per day, on top of the existing Congestion Charge. This generally relates to vehicles bought before 2006.

For a company based in the capital, which operates more than 250 vehicles, the new charge will take Pimlico’s payments to Transport for London to around £600,000 per year.

While the company understands the need to reduce pollution in London, and has a strategy to upgrade its fleet to both compliant vans with Euro VI and electric vehicles, it believes that a ‘Sunset Clause’ should be introduced as no company can afford to replace all its vehicles in a short space of time and because electric commercial vehicles have only recently become available to businesses.

The company has already made moves towards an electric fleet with the introduction of a 100 percent electricity-powered plug-in van, which hits the road on 23 October, but it will be several years before its fleet can completely avoid the T-Charge

Charlie Mullins, founder and CEO of Pimlico Plumbers, said: “This is a potentially crippling new tax on business, and one that will, for many, be the last straw that pushes them skint. For businesses like mine operating in Central London, already paying around £300,000 in Congestion Charges, and for the general public who commute in and out of London by car, being hit with yet another charge during these very uncertain times in completely unnecessary.”

“I understand that pollution is bad for people, and we need to do something about it. But so is unemployment, and there is no other way to get around London to do business, service machinery, make deliveries and the like except to drive trucks and vans about. A plumber can’t sit on the Tube with a bath on their lap and tools under their arm!

“We’ve factored in going green into our business model, which is why we have introduced our first fully-electric van, but no business can cover the cost of completely replacing their fleet in such as short space of time.

“What we need is more time to phase-out vehicles, especially the diesel ones. Something like a five-year ‘Sunset Clause’ would be sensible, after all electric replacements for the vehicles they are trying ultimately to get rid of are only just now coming online.”