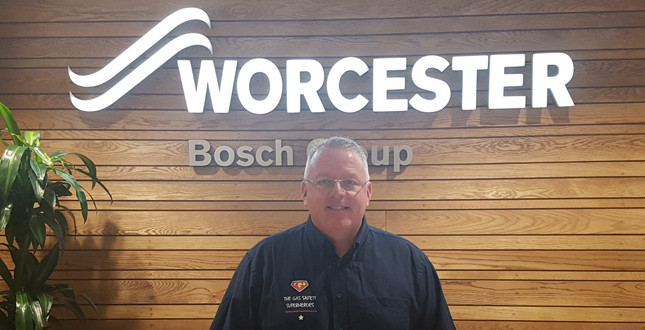 Followers of @WorcesterBosch were able to engage directly with the expert heating engineer as he went behind the scenes at the manufacturer’s factory, offices, and redeveloped Training Academy before it officially opens later this month.

Dozens of installers from around the country showed their support for Safety Superhero Day by taking a #SafetySelfie with their Gas Safe ID card and sharing it via social media. A lively debate around industry best practice and homeowner habits also took place, while a poll revealed that a huge 81% of heating engineers are never asked to show their Gas Safety card

Safety Superhero Day is a continuation of @PRHullLtd’s work as one of the trio of installers who challenged their peers to become Gas Safety Superheroes during last year’s Gas Safety Week. The initiative has been introduced to help boost awareness of the Gas Safe ID card and the importance of annual servicing through the sharing of knowledge and resources.

Paul Hull said: “It was a real pleasure to go behind the scenes at Worcester and spend the day engaging with passionate, likeminded installers from all over the country.

“Having worked in the industry for over 30 years, the aim is to leave it in a better state that I found it. When we created a campaign for last year’s Gas Safety Week, I never thought it would evolve into the social enterprise that exists today and certainly never imagined a brand as well respected as Worcester would be supporting us in our campaigning. We are eternally thankful for their support and hope Safety Superhero Day becomes an annual event in which engineers celebrate the positive contributions they make to their fellow professionals, their customers and our environment.”

Martyn Bridges, Director of Technical Communication and Product Management at Worcester, Bosch Group, said: “It’s important that manufacturers and installers join forces to raise awareness of gas safety and energy efficiency. After all, installers are on the front line, working closely with homeowners day in, day out. We had a great day with Paul, engaged with countless engineers, and had plenty of fun along the way!”