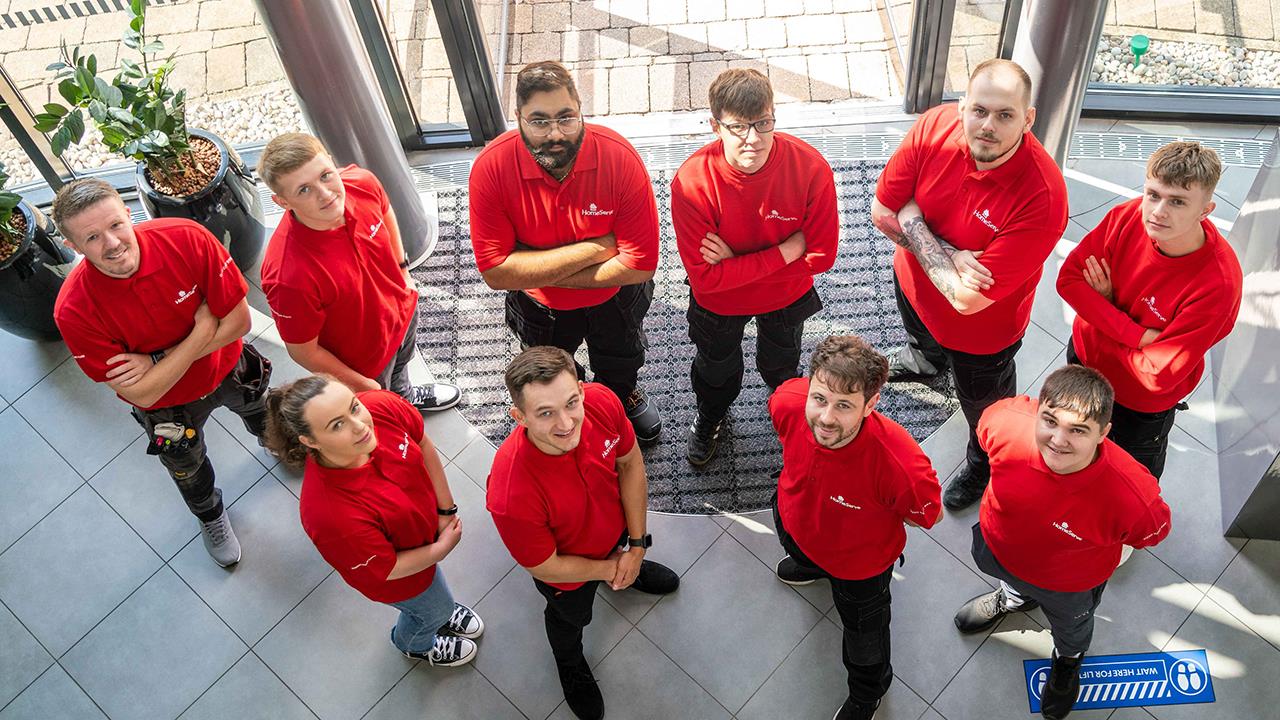 A group of 10 apprentice gas engineers have secured their first role in the industry after over 5,000 applications for the positions at home repair and improvement company Homeserve.

The recruits, aged between 18 and 30, will be studying a two-year gas heating apprenticeship at HomeServe, and be trained at its Apprenticeship Academy in Bennerley Road, Nottingham.

The scheme will give them access to a job at HomeServe, an engineering mentor, on-the-job training – and the keys to their own red HomeServe van.

Karen Halford, People Director at HomeServe, said: “It’s wonderful to see these young people embarking on a fantastic new career in the home repairs and improvements sector. It’s an exciting time to be joining the industry as it’s booming – with demand for these skills outstripping supply.

“With demand only expected to increase further by the end of this decade, HomeServe is investing in the skills of the next generation to ensure we can meet that demand while driving towards the world’s net-zero targets as we decarbonise our homes.”

The apprentices will study the 22 month-long Level 3 Gas Engineering qualification at the Academy four days a month and continue to learn on the job under the supervision of an experienced mentor in their area. The candidates will be based up and down the country, from Accrington in Lancashire down to Milton Keynes in Buckinghamshire.

Helen Booth, Director at the Apprenticeship Academy, said: “For these ambitious young people, there will be no painful student loan at the end of training, they will have a great career and the chance to keep on learning as the industry grows.

“Attitudes are beginning to change towards apprenticeships and vocational education. The youth labour market has been impacted by the pandemic so access to employment like trades apprenticeships are becoming increasingly important as part of the UK’s long-term economic recovery.”

Apprentice Edward Allen, 18, a former pupil at The Brunts Academy in Mansfield, was one of the successful cohort, joining the HomeServe Academy this week.

Edward said: “My dad is a gas engineer and I have watched him doing his job over the years, so I decided I wanted to try it myself. I really enjoyed my plumbing qualifications and wanted to go further in the sector. This is a brilliant opportunity for me.”

Apprentice Nadia Lovatt, 23, from Fulwood in Preston, Lancashire, left a role in a call centre five minutes away from her home, to start her training as a heating engineer with HomeServe covering the whole of the Northwest of England.

She said: “When I learned I had got through from 5,000 applicants, I felt enormously proud. I want to show people that girls can be plumbers and gas engineers and make a success of it.”

APPRENTICESHIPS GAS ENGINEERS HOMESERVE SKILLS
Tweets by HVP
Make sure you’re on top of changes in the industry, and sign up for free to receive your monthly copy of HVP and our weekly email newsletter
SUBSCRIBE TO NEWSLETTER
SUBSCRIBE TO MAGAZINE