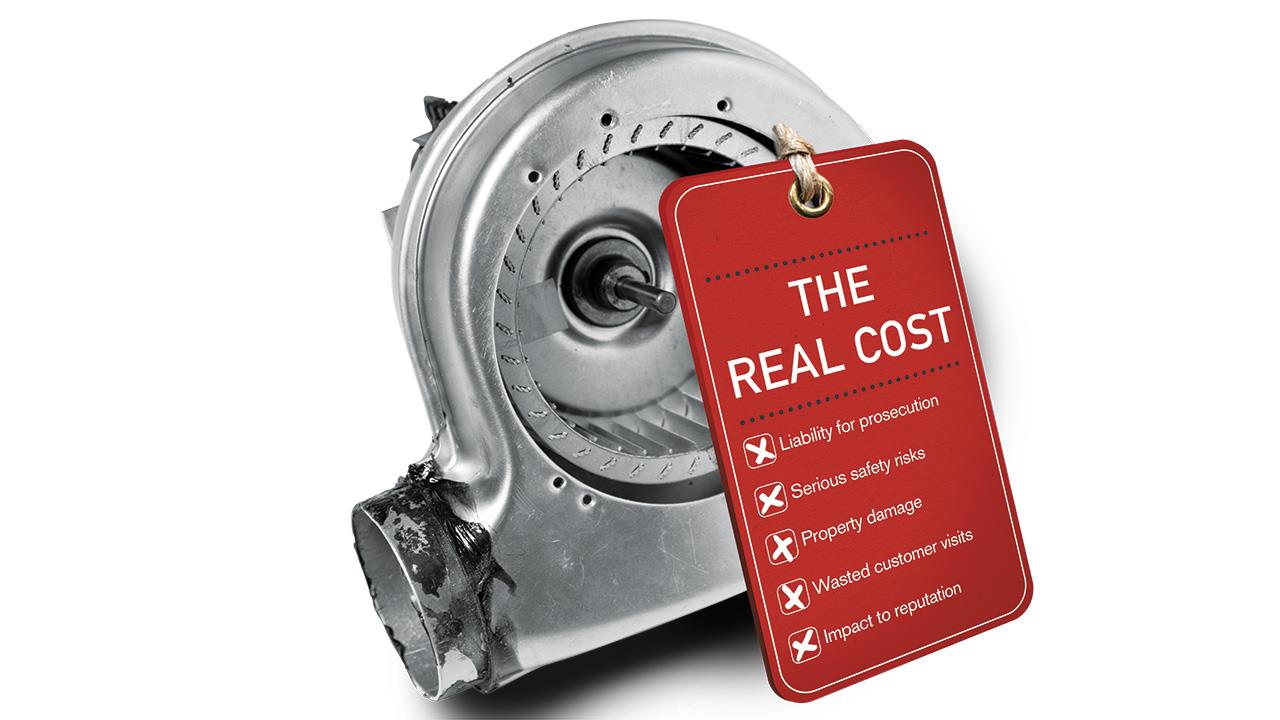 Given the extensive lifetimes of modern boilers, it is not unusual for replacement components to be needed, especially following the prolonged use of fast-moving parts. Sourcing genuine spare parts directly from the official boiler manufacturer stockist is a simple process, however in some instances refurbished, reconditioned, modified, or copy parts are selected by some in place of these. This is when installers can run into problems.

What are non-genuine spare parts?

When boiler manufacturers produce spare parts, these have undergone a rigorous testing procedure and have been approved for use in the boiler they are designed for. Parts that are available from businesses that have been ‘refurbished, reconditioned, or modified’ may have once been genuine, but as soon as these have had work done to them, they can no longer be claimed as a genuine part.

Businesses selling altered parts must inform you that it is not the original manufactured product and must remove all original markings. Some companies may advertise that these reconditioned parts are as reliable as the originals, however it’s impossible to know what specifically has been altered during modification of the spare. Therefore, the safety and quality of the modified piece cannot be guaranteed.

As soon as alterations have been made to a genuine part, the original manufacturer is no longer responsible for the component and the accountability falls to the business producing it and the tradesperson installing it. This poses a risk as these parts no longer come with the manufacturer’s guarantee, so if anything goes wrong this could damage the reputation of the seller and the installer, who would both be liable in the event of prosecution.

The use of non-genuine parts may invalidate the existing safety-critical certifications that are required under the Gas Safety (Installation & Use) Regulations. This could mean that the boiler is not only made unreliable and potentially dangerous; it will also invalidate the boiler’s warranty.

While some non-genuine parts can look very similar to a genuine part, this is where the likeness stops. There are a few tell-tale signs that signal a modified part, lacking in quality.

Poorly welded fixings are a sign that the spare is non-genuine and may be dangerous. If fixings in a heat exchanger are incorrect then they could easily break when put under too much pressure, this could lead to leaks and damage the boiler itself or the homeowner’s property.

Scorch marks or a damaged ‘warranty void’ sticker are further indicators that the spare is not safe. A scorched PCB board indicates poor workmanship which could lead to overheating and eventual failure, so this part should not be installed.

Missing components is another warning of non-genuine parts, for example boiler fans missing a thermal cut-out. Without this, the motor could overheat, shortening the product’s life and even resulting in a fire in more severe cases. Assessing the rotor motion is another way to test the legitimacy of the product. Refurbished fans can be unbalanced and noisy, a sign they are more likely to fail.

Installers are responsible for the boiler they are servicing and repairing, both during and after the remedial work. So, if the boiler was to break down or an accident happened because non-approved parts were used, they could be held liable. It is evident that the risk some non-genuine parts pose to customer safety and the installer’s professional reputation clearly outweighs any initial savings.