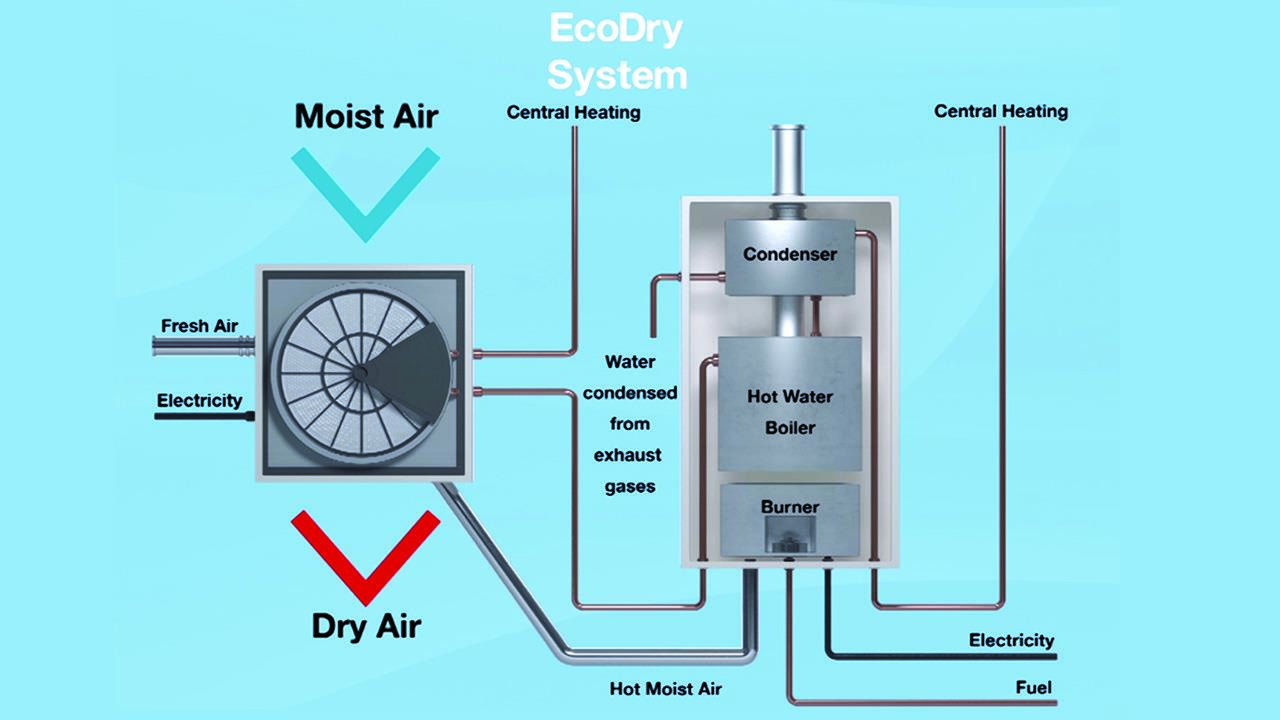 A new boiler concept has been unveiled which claims to produce heat from water vapour.

The patented EcoDry boiler, from Eco-nomic Innovations, increases boiler heat output by condensing water vapour not just from the combustion products as conventional condensing boilers do, but also water vapour already in the air.

Jonathan Eves of Eco-nomic Innovation says an early prototype was built and tested by the InnoTech Centre in Northern Ireland and was successfully commissioned as an oil boiler, however he expects the EcoDry to be more commonly used in conjunction with a hydrogen fuel in future.

He explained: “The patented EcoDry domestic boiler heats the room in the vicinity of the hydrogen boiler by passing air through a desiccant where the moisture is adsorbed and the heat of adsorption – similar in value to the latent heat of vaporisation – heats the desiccant which in turns heats the air passing through it. This heat is renewable energy derived from energy stored in water vapour as latent heat. The rest of the building and hot water is heated by the boiler in the conventional wet system of radiators.

“The regeneration of the desiccant is achieved by a specialised radiator that sits beside the boiler and heats the burner air stream sufficiently to regenerate the desiccant. After regenerating the desiccant, the high moisture content air is fed to the boiler burner and the heat that was added to drive the moisture from the desiccant (heat of adsorption) is recovered as the latent heat of vaporisation in the boiler condenser. The wide flammability limits of hydrogen enable it to burn in air with up to 60% moisture.”

As the boiler draws in water vapour, it will also help to dry the air in the home, providing health benefits by helping to reduce the likelihood of mould occurring. Jonathan added: “Modern air sealed homes are particularly prone to damp, as moisture is continually being added to it through breathing, showering and cooking – hydrogen cookers generate 60% more water vapour in the combustion products than gas.”

Jonathan concluded: “In the looming climate crisis, the future for the domestic boiler is with zero carbon fuels like hydrogen, that are produced from renewable sources such as wind turbines and solar panels.

"There are three large hydrogen demonstration projects in the UK; HyNet in the North West of England, HyDeploy in Staffordshire and H21 in Leeds. Should we be successful in our funding application, we will build a demonstration EcoDry boiler suitable for testing in these demonstration projects. We aim to show that EcoDry will consume up to 37% less hydrogen than a hydrogen condensing boiler.

"We believe that our EcoDry innovation will ensure that the domestic boiler continues to heat homes in the UK and throughout the world for decades to come.”

BOILER ECODRY ECO-NOMIC INNOVATIONS HYDROGEN WATER VAPOUR
Tweets by HVP
Make sure you’re on top of changes in the industry, and sign up for free to receive your monthly copy of HVP and our weekly email newsletter
SUBSCRIBE TO NEWSLETTER
SUBSCRIBE TO MAGAZINE