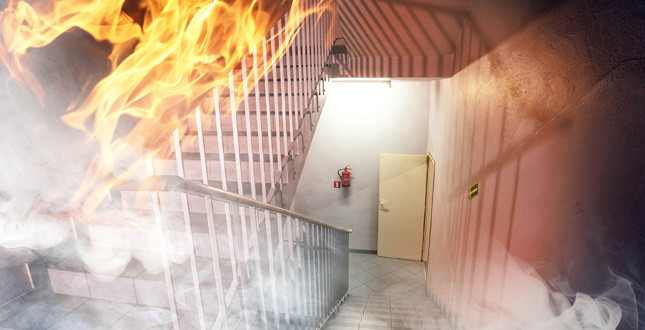 A major survey of 2,000 UK adults in support of Fire Door Safety Week, 25 September – 1 October, has shown an alarming lack of general public awareness of the essential role of fire doors, which are a legal requirement in all commercial, public and multi-occupancy buildings.

The research, carried out by IronmongeryDirect which supplies fire door hardware and accessories, revealed that a quarter of people are unaware that fire doors must be kept shut at all times and that 49% of those surveyed say they have seen a fire door propped open.

The results also showed that over a third (36%) admit that they would prop a fire door open at certain times, such as when needing to regularly pass through a fire door protected doorway, needing fresh air or when moving heavy objects.

According to the British Woodworking Federation, the organisation behind Fire Door Safety Week, three million fire doors are installed each year.

“Our survey was carried out just a few weeks after the Grenfell Tower fire in June, so it is disturbing that a significant proportion of the general public seem to lack basic fire door knowledge”, said Wayne Lysaght-Mason, Managing Director of IronmongeryDirect. “We would urge people, especially trade professionals, to use our online fire door checklist to help assess whether fire doors in buildings they occupy or are responsible for are legally compliant.”

Following the Grenfell tragedy, the company reported a sharp rise in the sale of intumescent door seals, door closers, smoke alarms, and other fire related products.

The survey also highlighted that nearly six in ten people (59%) do not know how to identify a fire door and that 13% of people who do would either take no action or be unsure what to do if there was an obvious problem with a fire door.

In previous research among its customers, IronmongeryDirect also discovered that most of the tradespeople surveyed (73%) had noticed fire doors without correctly fitted seals, and 74% had seen a blocked or obstructed fire door.

The safety campaign says that fire doors are often the first line of defence in a fire and their correct specification, maintenance and management can be the difference between life and death for building occupants. However, they remain a significant area of neglect, can often be the first thing to be downgraded on a specification, and are too frequently mismanaged throughout their service life, propped open, damaged and badly maintained.