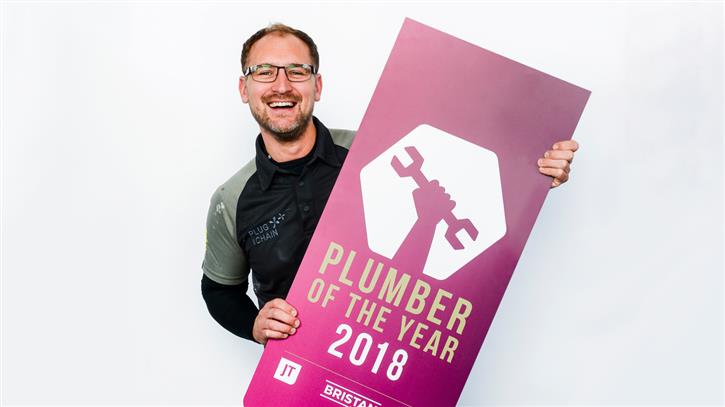 Tom Hogarth spoke to Steve Bartin about his plumbing journey and the unique approach to business that has brought him success and contributed to his recent Plumber of the Year 2018 win.

Steve Bartin isn’t one to shy away from a task, or going after what he wants. It’s this tenacious and hardworking attitude that secured him his apprenticeship as a teenager, built his plumbing business from the ground up, and has now earned him Plumber of the Year 2018, a title bestowed upon some of the most respected tradespeople in the UK.

At 14, Steve charmed his neighbour into showing him the trade and allowing him to help on small plumbing jobs. This initiative and drive led him onto an apprenticeship at 16 with the same neighbour’s plumbing business and he never looked back, even winning a Plumb Center Achievement of the Year award in his final year as an apprentice.

It was only after 10 years with the company that Steve finally decided the time was right to set out on his own. Many ambitious plumbers might find the idea of a decade at the same company unenterprising, but Steve attributes his success to a willingness to stick around and learn everything he could before making his own way in the industry.

“People always said ‘I bet you wish you left years ago’, and I always replied no, because the years of experience I gained with that firm means that today there’s very little I don’t know about what I do,” he said.

Now equipped with all the knowledge he could get, Steve got his first job under his belt and cracked on, as Bartin Plumbing and Heating. It wasn’t long before he realised there was more he could do to grow his business and make his mark as a unique company in the area. When he realised one of his biggest issues was the local showrooms and merchants, Steve knew what he had to do.

He said: “I was sending my customers out to these showrooms and the service was less than usual, to say the least. They were not only rude, they were unhelpful, and I just thought that I could do this, and I could do it better.”

In 2009, he opened Plug and Chain, a high-end bathroom showroom to complement his plumbing company and ensure that he could support every one of his customers the right way, with products he knew could get the job done.

And it worked, Steve gained greater control over the experience he could offer his customers, and they were happier for it. In 2012, the bathroom moved to a more high-end location in Taunton, in a courtyard with a Michelin star restaurant, a luxury salon, and a tailor. A cricket club sits nearby and, at night, customers dine in the restaurant across the courtyard in full view of the luxury showroom, which they’re sure to remember when they need four bathrooms done and all the rads replaced.

Steve has endeavoured to pass on the opportunity he had in the form of an apprenticeship to more eager young people and, despite the frustration and difficulty of the process at no small cost to his time and business, he’s determined to invest in the next generation and give the right people the chance to learn the trade alongside him.

Even now, Steve is in the midst of the search for a new apprentice and has plenty of advice to offer to young people looking to make themselves into the kind of experienced tradesperson and business owner that he has become. He said: “If you’re leaving school, and you want to be a plumber, then go see your local tradesperson. Don’t go through your parents, do it yourself and it will go a hell of a long way. Be presentable, and treat it as an interview. Present yourself, sell yourself, and show how keen you are.”

It was this keen and thorough attitude that has brought Steve from an apprenticeship at 16 to a successful, award-winning business with a bright future. He’s absolutely thrilled with his Plumber of the Year 2018 win and there is little doubt that there are more successes and awards in his future.

AWARD BARTIN PLUMBING AND HEATING HVP OF PLUG AND CHAIN PLUMBER STEVE BARTIN TAUNTON THE TIVERTON WIN YEAR
Tweets by HVP
Make sure you’re on top of changes in the industry, and sign up for free to receive your monthly copy of HVP and our weekly email newsletter
SUBSCRIBE TO NEWSLETTER
SUBSCRIBE TO MAGAZINE