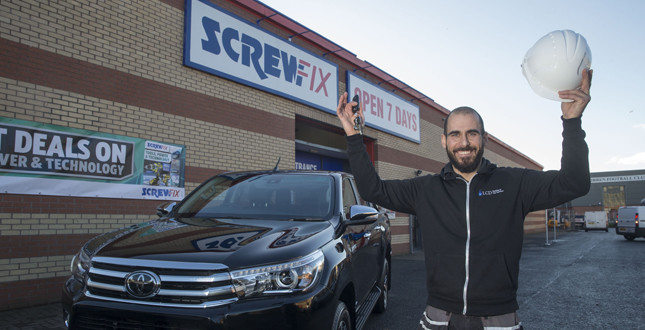 Lluis was awarded with the prestigious title of ‘Britain’s Top Tradesperson’ after competing against a huge number of talented tradespeople from all across the UK.

The contest, organised by Screwfix, saw thousands of candidates enter, but it was Lluis, owner of LCD Heating and Gas Services, who took the crown to be named Britain’s best. Along with his new title, Lluis received the keys to a brand new Toyota Hilux worth £32,000 OTR to help support his business and expand his clientele.

Lluis said: “It is an absolute dream come true being crowned Britain’s Top Tradesperson by Screwfix. I was so shocked when they told me I had won!

“My business has always been my pride and joy, so to have been awarded this title means so much to me. Not only was it a dream come true, but since the competition, my customer base has grown more than I could ever imagine, thanks to Screwfix. The award has not only given me the recognition, but also the confidence to take my business to the next level.

“I am so excited to receive this prize – not only will the vehicle be more reliable, but it will provide a professional impression when I arrive at a job.”

Graham Smith, Marketing Director at Screwfix, said: “At Screwfix, we understand the hard work tradespeople carry out every day and their ethos of going the extra mile in order to get the job done to the highest standard. At this year’s finals, Lluis stood out from the other contestants thanks to his strong commitment to bettering the industry, his impressive number of qualifications and his customer-focused attitude. We are not only delighted to hear that the title has already impacted his business, but we are thrilled to be able to present him with a Toyota Hilux. He truly is a deserving winner.”

The nationwide competition for Britain’s Top Tradesperson will return again in 2018.