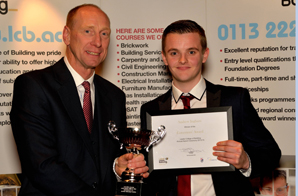 A young apprentice who persevered to fulfil his dream of becoming a plumber has been named as Leeds College of Building’s student of the year.

Andrew Ingham was presented with The Governors’ Award at the annual prize giving ceremony at Leeds Town Hall. There were 54 winners in total and guest speaker Andrew Firth from Sir Robert McAlpine, which is currently managing the Victoria Gate development in Leeds, presented the awards.

Andrew, who is from Leeds, West Yorkshire, has now completed the Level 3 plumbing apprentice and works for ACH Plumbing Solutions.

“Since leaving school I have always wanted to be a plumber. However, it was really hard to find an employer, so in 2009 I decided to enrol on a full-time plumbing course at the college instead and hoped to secure an Apprenticeship at a later date,” he said.

“The economy was struggling and an Apprenticeship didn’t materialise but I was enjoying my studies so much I continued full-time, working hard and always looking for employment at the same time. After five years, I have completed my studies and found a great job at ACH Plumbing Solutions. Winning this award is so rewarding, I feel very proud of my achievements and it was a fantastic experience to be recognised in this way in front of so many of my fellow students, family and friends.”

Leeds College of Building’s principal Mr Ian Billyard said: “Andrew is a shining example of someone who knew what he wanted and just went for it. He has forged ahead with his dream, worked hard and never given up on his ultimate goal of becoming a plumber. He is a valuable asset to ACH Plumbing Solutions and he embodies everything our College stands for – perseverance, talent and an unwavering commitment to his trade.”