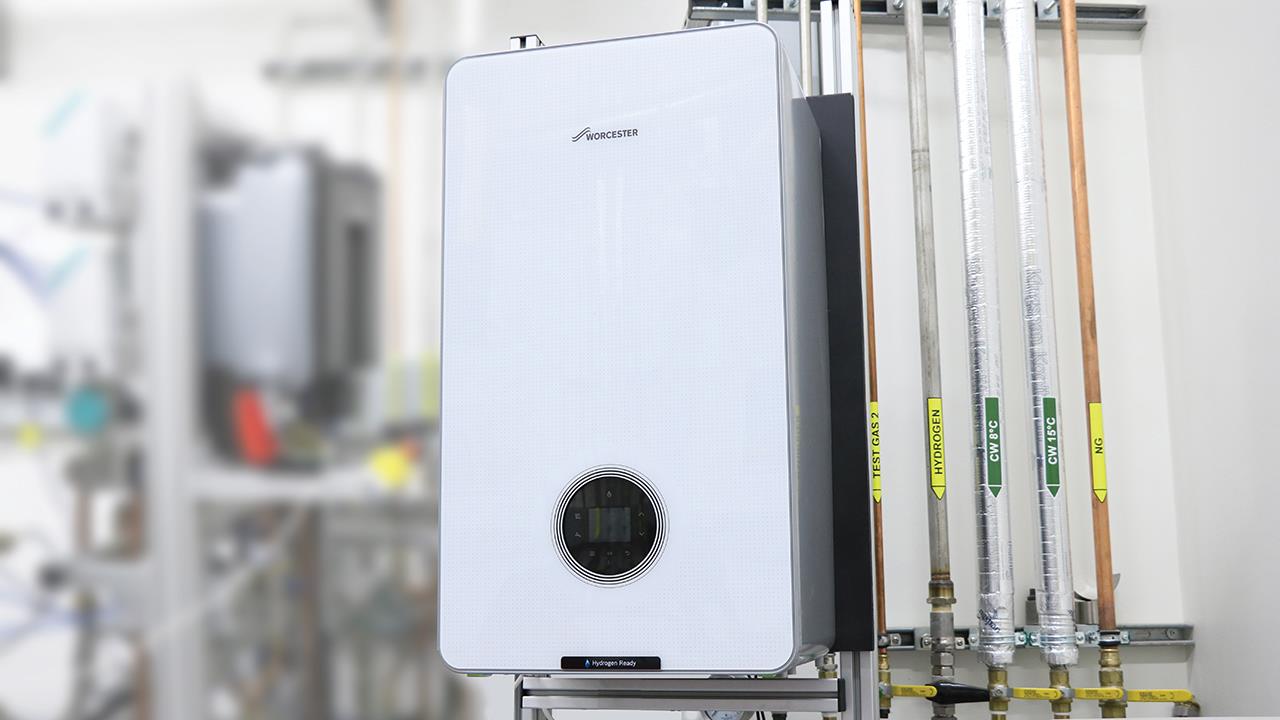 Martyn Bridges, Director of Technical Communication and Product Management at Worcester Bosch, delves into some of the challenges the company overcame when creating its first hydrogen-ready boiler.

The government has set a target to lower the carbon emissions from newbuild homes from 2025, with a longer view that all housing stock will be net-zero carbon by 2050. Basically, the gas and oil we use in our boilers today will not meet this target, so we must transition to low or zero carbon heating systems by this date.

One major player for the long-term view is hydrogen. As a manufacturer, dealing with the practicalities involved rather than the policy, we started to investigate hydrogen three years ago.

Our intention was to make a boiler that would run solely on hydrogen while using much of the technology within a boiler today. It makes sense to keep the components of the boiler the same, since they have been so successful throughout their time. Over the past 20-30 years, anything that has gone wrong has been ‘designed out’ of the boiler, so we saw no need to change such a well-made product.

Now, instead of just building a boiler that only runs on hydrogen, we have a prototype boiler that is ‘hydrogen-ready’. This change of direction means that the hydrogen boiler would be able to run on natural gas for its entire life, if necessary. If the time for hydrogen came, then with two or three low cost components and an hour of an engineer’s time, you would have a working hydrogen boiler.

With little to no noticeable change for the homeowner, some people might wonder what challenges had to be overcome to get to the stage of a fully functioning, ready to go hydrogen boiler. The answer, as the saying goes, is that it’s what’s on the inside that counts. With the majority of components staying the same, the biggest issue was around the internal flame itself; the speed, the emission of the flame, and the flame’s visibility (or lack of).

Hydrogen burns at a pace three times faster than natural gas, so it tries to burn back down past the burner and ultimately into the gas pipe and valve if it isn’t stopped.
In order to hit the sweet spot, we had to counteract the flame speed with sufficient air and diffusion on the burner itself. This meant the hydrogen flame could sit on the burner quite happily, heating up the water, just like a natural gas flame would do. I’m very happy to say we achieved this!

With current boilers, there is the ability to pass electrical charge through a natural gas flame, from one probe to another. When you turn a tap or the heating on, the flame is ignited and an electrical current would run through the flame from one sensing probe to another, allowing the control system to acknowledge the flame and keep the gas valve open and running.

This is basically the boiler’s way of seeing the flame for itself. If the boiler’s control centre doesn’t sense that a flame is alight, then it will shut the boiler off. The last thing you’d want to do is continue pushing unburnt gas into a combustion chamber of a boiler. Since you can’t run a current through a hydrogen flame, we had to come up with an alternative method of telling the control system that there’s an alight flame.

This was a challenge for us, working out which sort of device would pick up this flame. We decided to trial a UV cell. This was a brand new venture for us, it had never been used on domestic gas boilers in the UK before.

The UV device works safely and swiftly, acknowledging a flame is present as quickly as the present flame rectification system does. That’s incredibly important with a combi boiler when you want to have hot water ASAP.

The hydrogen flame has no visual presence which, for a boiler, isn’t a major issue as modern boilers don’t always have a flame viewing port. It is more of an issue with cookers, where it is normal to see a hob or hotplate flame. Consequently, while it’s still early days in the development of hydrogen, it may well be that an odorant and a colorant ultimately get added to hydrogen.

So, with that has come a working hydrogen boiler prototype. A great step towards reaching all net-zero goals that are to come. I don’t talk for just myself when I say that the industry is approaching some heavy changes, and hydrogen is a highly viable option to overcome the challenges that lie ahead.

BOILER DECARBONISATION HEATING HYDROGEN LOW CARBON MARTYN BRIDGES NET ZERO NEWBUILD WORCESTER BOSCH ZERO CARBON
Tweets by HVP
Make sure you’re on top of changes in the industry, and sign up for free to receive your monthly copy of HVP and our weekly email newsletter
SUBSCRIBE TO NEWSLETTER
SUBSCRIBE TO MAGAZINE