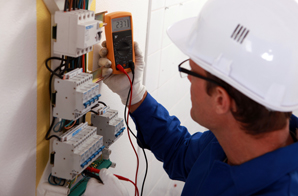 Over 90% of respondents agree that electrical safety checks in the private rented sector (PRS) every five years, or more frequently, should be mandatory, according to a recent survey.

The release of the report follows a government review of property conditions in the private rented sector. The review sought industry views on whether the current approach to electrical safety strikes the right balance, questioning whether there should be a statutory requirement to have electrical installations checked regularly.

It also comes in the wake of a report by the Electrical Safety Roundtable, which highlighted limited electrical safety enforcement in the home and recommended greater powers for local authorities to enforce of Part P of the Building Regulations more effectively.

National Association of Professional Inspectors and Testers (NAPIT) Trade Association chairman, Frank Bertie, said: “NAPIT is very concerned about the standard of electrical safety in the private rented sector. A study of private renters by the housing charity Shelter last year found that 16% experienced electrical hazards in the home. This new report by Electrical Safety First provides significant evidence to further illuminate this worrying trend and explore its impact on one of the most vulnerable groups in our society.”

“The issues considered in the government’s recent consultation affect up to 9 million people in England and we are acutely aware that their response is now long overdue. The support expressed for the introduction of mandatory electrical safety checks in the private rented sector every 5 years, highlighted in this Shock to the System report, echoes our response to this important consultation. We also strongly support the proposal to require the checks are carried out by a registered, competent electrician in order to ensure that they are both thorough and robust.”

“In line with the recommendations of the Electrical Safety Roundtable report released recently, we also strongly agree that greater powers should be given to local authorities to improve electrical safety in the private rented sector. The evidence of unacceptable levels of risk in this in this area is mounting and, with many influential voices within our industry now calling for action on these important issues, I’m confident that, together, we can affect real positive change.”

A summary of the Electrical Safety Roundtable report 'Electrical safety in the home: Enforcement of Part P of the Building Regulations in England' is available at: www.electricalsafetyroundtable.co.uk.