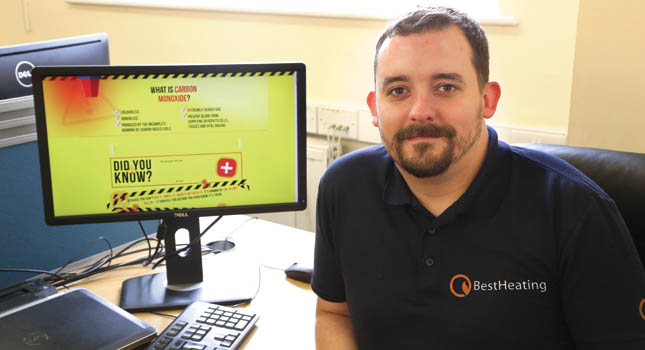 Colourless, odourless and tasteless, carbon monoxide is a substance that can be fatal without giving its victims any clear warning of its presence. John Lawless told HVP what role he believes installers and engineers have in educating the public.

Estimated statistics from the Health & Safety Executive (HSE) suggest seven people in the UK die every year after being exposed to carbon monoxide (CO) gas, though other sources such as the Gas Safety Trust claim the true figure – masked by differences in the way figures are collected – is closer to 50.

Symptoms include headaches, dizziness, nausea, tiredness, loss of consciousness and chest or stomach pains. However, these are often mistaken for symptoms of more common and non-life threatening conditions such as flu, meaning no medical assessment is sought.

For this reason, organisations such as Gas Safe Register encourage the installation of an audible CO alarm, but according to 2009 government statistics only around six to seven million UK households – out of 26.7 million in total – have such a device installed. In addition, the lifetime of gas sensors in these devices can vary, with the most generous offering warranties that extend to six years.

With this in mind, online radiator retailer BestHeating has built a site promoting awareness of CO poisoning – thesilentkiller.co.uk.

Mr Lawless launched the campaign, he says, because of the sheer number of installers and heating engineers that expressed to him their disbelief at how few people know what symptoms to look for in a victim of CO poisoning.

“The issue is something everyone in the industry should be jumping on,” he said.

A law requiring landlords to install working smoke and carbon monoxide alarms in their properties, to be introduced in October this year, was announced by housing and planning minister Brandon Lewis in March. The government estimates the new requirements will prevent up to 36 deaths and 1,529 injuries over 10 years.

“It is a big, big step in the right direction,” said Mr Lawless, who sees it as a sign of progress even if it only addresses the lack of adequate precautions in rental properties.

He also sees an opportunity for installers to generate income when visiting homeowners by offering to fit alarms on top of work they were originally commissioned to perform.

“If heating professionals stock CO alarms they can also tack a little bit of cash onto the end. Almost every house has a smoke alarm but not a CO alarm. From an installer’s point of view it’s nonsensical not to be making people aware of it.

“In the long run you are saving people’s lives.”

The role of professionals

Mr Lawless believes what sets BestHeating’s site apart is what he calls his “personal mission to kick up a fuss”.

“The thing that has been missing is perhaps that it has not been pushed in the way I intend on pushing it – annoying the hell out of people in the industry.

“The message we are spreading has not changed one bit; heating installers and plumbers know about this stuff already.”

To launch the website Mr Lawless sought the advice of those with experience of the effects of CO poisoning. This meant consulting heating engineers he had worked with in his role at BestHeating and the likes of CO-Gas Safety Society president Stephanie Trotter.

“What Stephanie and others in the industry have recommended is to put into one concise, easily digestible page the facts and figures surrounding CO poisoning so people can share it,” he says.

Alongside consulting Ms Trotter and representatives of Gas Safe Register and charities such as CO Awareness, BestHeating contacted the Association of Professional Independent Chimney Sweeps (APICS) and HETAS, a body that approves heating appliances and services, for information.

In this way, Mr Lawless mined a broad field of collective CO experience to improve the website.

Lynn Griffiths, CO Awareness president, another figure Mr Lawless consulted, lost her husband to the illness. Like her three children, she suffers the long-term effects of exposure to the gas including headaches, nausea and difficulties with her sight.

Ms Griffiths now campaigns to raise awareness of the issue with heating and construction industry professionals, on top of lobbying the government for more extensive NHS doctor education. She organises the annual Carbon Monoxide Awareness Week, which celebrates its 10th anniversary this November.

Initial responses to the campaign have been positive, with organisations such as caravan and camping societies, and a boat safety site, all sharing the page.

Mr Lawless is determined to convince a Member of Parliament to take up the cause, and is continuing to work with charities to push the issue in the meantime.

“We will be doing a safety blog every week in the run-up to the 10th Awareness Week, which starts on 16 November,” he said.

“There will also be more technical, trade-based material rather than a ‘top 20 mistakes people make’. We’re trying to become a figure of authority on building regulations and landlord legislation.”

He would be happiest, however, if visitors were inspired to share it among colleagues and friends, thus heightening awareness of CO poisoning. This would not cost money but could save lives.

John Lawless is an executive at BestHeating