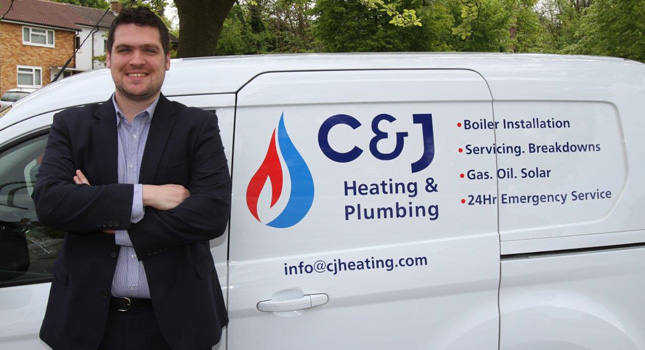 Local heating company C&J Heating has been named as a finalist for the Federation of Small Businesses' (FSB) Stevenage Business of the Year, at the 2015 FSB Hertfordshire Business Awards.

The Stevenage-based heating business is run by father and son team, Nigel and Lewis Howard. They have been recognised for a number of achievements, including increasing their turnover by 50% in the last twelve months, overcoming national competitors to win some large scale national heating contracts and becoming the face of the Smart Installer Club, for national business HomeServe Alliance.

Lewis Howard, director, C&J Heating said: "We are delighted to be finalists at this year's FSB awards and would like to thank our employees and customers for all of their support. The Awards are all about recognising SMEs and the hard work and dedication we put in every day. The big players often get all the credit in the heating industry, so it is great to be able to fly the flag for the smaller heating businesses across the country."

"This was the toughest year yet for these well respected and hard-fought awards," said Damian Cummins, of the FSB Hertfordshire Business Awards. “We were overwhelmed with entries and it has been a tough task to whittle them down to the list of finalists."

Lewis Howard, director of C&J Heating, sits on the British Standards Committee and has recently been appointed as an area board member of the Federation of Master Builders.