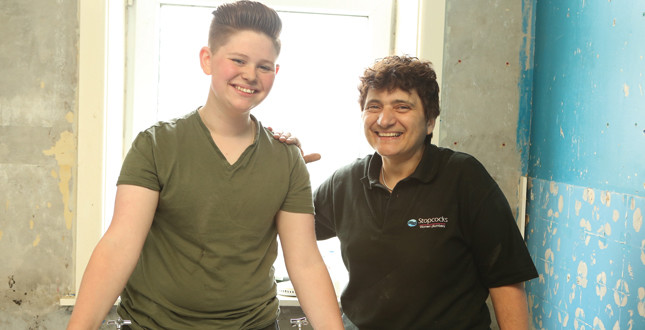 HVP sat down with Hattie Hasan, founder of Stopcocks Women Plumbers, to talk about her journey from budding plumber to successful businesswoman and role model. Tom Hogarth reports.

When Hattie Hasan founded Stopcocks almost 30 years ago, she didn’t have any idea how much of an impact she would eventually have on the industry, or that she would help create an environment for women who have the same passion that she does.

But Hattie’s plumbing career did not get off to an easy start.She was the only female student at college to study plumbing, and there were no allowances made for her. While having no student toilets available for women was one of her problems, it was far from the greatest.

She said: “At the time, there were naked women posters all over the workshop. I was 27, I’d been about a bit so I wasn’t intimidated. But I just had a quiet word and said, ‘how do you think it makes me feel?’”

The world after college wasn’t any easier, and Hattie found no success in her search for an apprenticeship. Despite writing over 500 letters to plumbers and companies, she received zero replies. When making follow-up calls, she often received answers like 'are you ringing up for your husband or boyfriend?'

It wasn’t until 2006, after 17 years plumbing on her own, that Hattie felt the urge to expand what she had started, to create what she calls “the army of women plumbers.”

She sought out other female plumbers in the industry, and established an online community, which included a monthly newsletter where she would interview prominent tradeswomen and keep in touch with the community.

Meanwhile, Hattie spent the next few years researching every angle of what would eventually become Stopcocks as it is today, figuring out how she could create a business to support women to strike out on their own as plumbers, essentially following the same path that she did.

She said: “I was still plumbing, but in my spare time I was drilling down into what women at the time had to go through, and it was exactly the same as what I had to go through. Things hadn’t changed that much. Colleges do have places for women, and there’s money thrown at it every so often, but those things are not sustainable, and they’re not followed up on.”

By 2017, plans had come to a head. Stopcocks had not only expanded across the UK with its cadre of self-employed women plumbers in a variety of areas throughout the country, but also launched the inaugural Women Installers Together (WiT) Conference in London.

“I’ve been going on and on about getting more women in, and it’s always talking about difficulties, but I wanted to celebrate those who had jumped the hurdles,” said Hattie. “So, I thought, let’s do a celebratory event, and that’s where the first idea for the WiT Conference came from.”

The conference saw enormous success in its first year, with a raft of sponsor partners, led by Polypipe and Vaillant, media coverage and attendance on the day itself. A second event is currently planned for 4 July 2018, with Polypipe continuing to partner and support the event, and Graham Plumbers’ Merchant as the headline sponsor.

Establishing this route for women plumbers is the core of what Hattie wants from Stopcocks, allowing women to take the same path that she did to stand on their own and develop as plumbers, and as professionals.

She said: “One of the greatest things we do as Stopcocks is that we mentor. We mentor our plumbers because the majority of them who come to us aren’t going to have much experience, because they’ve been unable to get it. It’s the biggest part of what we offer, apart from all the ways of making self-employment less risky. Out there on your own, but not alone.”

It’s clear how frustrating the gender diversity issue in plumbing is for Hattie, as she explains how little change she has seen through her significant time in the industry. But Stopcocks and the WiT Conference could be the spark the industry needs to make serious change.

Hattie explained: “Every so often, we have an inventory of all the women we’ve known and we contact them and ask if they’re still plumbing, and around 80% come back to us and say no.

Alongside her business, organising the WiT Conference, and talking at businesses and colleges around the country, Hattie has been delving further into discovering the extent of the problem in the industry.

She elaborated: “We had a meeting with Gas Safe Register [to ask about the amount of women in the industry]. They went and did some research, and they estimated that there are only 500 women on the Gas Safe Register.”

Hattie is quick to point out that she’s not striving for an unrealistic 50/50 split of men and women in the industry.

She believes that there are going to be some professions and trades which are more attractive to one gender than the other, but she wants those women who aspire to become plumbers to have access to the same opportunities that their male counterparts do.

“There are so many men in the industry who don’t realise that our experience is very different to theirs. And why would they know? Unless somebody like us is available to tell them,” she said.

“If they care enough to support us, and we do have some fantastic supporters, then I’m open to talking to anyone who wants to help. In any way, even just by retweeting things [on Twitter], just by saying it’s great. The simplest things can show solidarity.”

From the beginning of her plumbing career to now, Hattie has been a force for change, and today, with her plans bearing fruit at an incredible rate, and with the support behind her steadily growing, she is in a position to not only grow her business, but also help enact great change in the plumbing and heating industry.