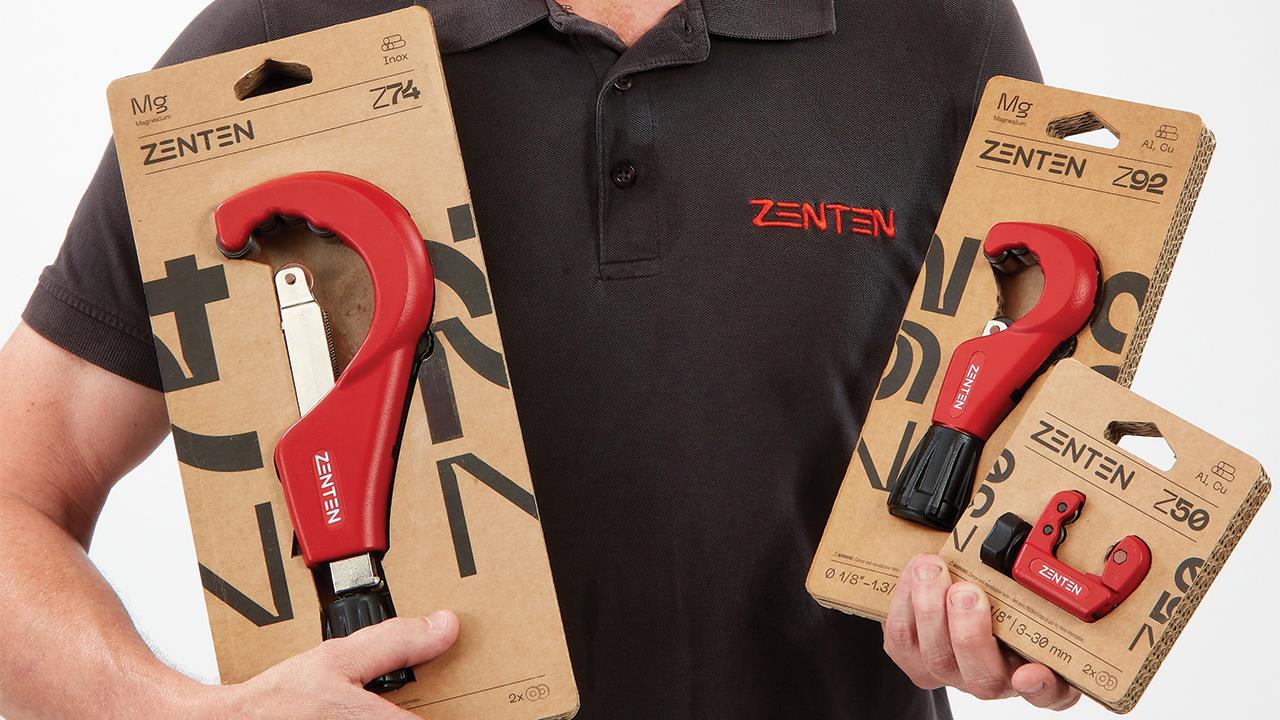 Sustainability is an increasingly important part of our lives and businesses. Although plastic is an incredibly versatile material used in manufacturing for decades, we’re only now coming to terms with the impact on our environment.

Astonishingly, according to packing manufacturer Ribble, half of plastic is created for single use, with only 5% of plastic recovered from the total amount produced. We are seeing manufacturers across the board reducing their plastic footprint by innovating when it comes to packaging design, including in our industry with some sealant manufacturers turning to eco-foil rather than plastic tubes to distribute their products.

More still needs to be done to reduce plastic waste across the construction industry, but one company is hoping to shake up the way in which tools can be distributed with its newest packaging innovation.

Spanish manufacturer Zenten, best known in the UK as a manufacturer of pipe-cutting products, has developed a new packaging solution that features no plastic whatsoever. Unlike the conventional ‘clamshell’ blister-pack design, the packaging features multi-layered cardboard, glued together using ethylene vinyl acetate. The front and back layers are cut out to the profile of the tool, ensuring the tool is visible to the customer.

Darren Chalkly, plumber turned founder of Nerrad Tools, who is now part of Zenten’s management team, produced the initial design in the hopes that it would help its product offering stand out from competitors in the market.

He said of the packaging: “You couldn’t find anything more simple; just three or four thicknesses of cardboard glued together with a hole in the middle.”
This simple design has been well received by Zenten’s customers so far, according to Darren.

He continued: “We sent a couple of images [of the design] under the umbrella of a non-disclosure agreement to some of our potential customers. They came back and said ‘you’ve cracked it, if you can put that into practice we’ll look to give you front and centre areas in the stores’.”

An additional, originally unforeseen, advantage over conventional tool packaging is that, with the tool exposed, customers can touch the tool prior to purchasing, affording the buyer a more tactile experience.

Darren explained: “That wasn’t us being clever, it was something that happened almost by accident. When it’s half in the cardboard and half-out, you are going to be able to touch the tool.”

However, even though the tools are more exposed than in conventional packaging, Darren says that they are securely held in place because of the way the cardboard is cut, as well as a couple of dabs of ethylene vinyl acetate.

He added: “The combination of the smaller cut ‘socket’ and the glue makes it very hard to remove the tools.”

Although the packaging is currently three times more expensive to produce than typical clamshell designs at its manufacturing base in Spain, the environmental benefits and uniqueness of the offering make it a worthwhile proposition for the company, in Darren’s eyes.

He admits production costs could be cut by moving production to China, but “the transport carbon footprint would be huge and offset some of the good stuff we’re doing with the packaging”. Plus, in Spain, Zenten knows exactly where the cardboard is coming from, as well as the ins and outs of the sustainability of the forests there.

The packaging project originally came about to help drive the company’s growth in the USA, where it will launch first, but Darren says there are plans to roll out it out across the UK and Europe further down the line. Although a UK launch is likely still a ways off, Zenten has shared the designs with UK installers who have been able to weigh in with their thoughts.

Darren said: “The response was good, but the feedback in the US was twice as positive. It’s quite fortunate that we are launching in California, because it’s the perfect place to launch [given their views on the environment].”

Although Zenten says it is the first manufacturer to introduce a sustainable tool packaging design, Darren is hopeful that other companies will follow its lead.

He said: “If everybody, or if even 30% start doing it, when you look at the numbers, that’s big. Am I thinking we’re going to change the world? Of course I don’t, but it could make a difference.”

With plastic waste continuing to cause damage to both animal and plant life on land and in the sea, reducing the amount of plastic we consume can only be a good thing. Zenten’s cardboard packaging option will now provide tool buyers with a new way in which they can help to reduce their own plastic footprint.

PACKAGING PLASTIC RECYCLING TOOL
Tweets by HVP
Make sure you’re on top of changes in the industry, and sign up for free to receive your monthly copy of HVP and our weekly email newsletter
SUBSCRIBE TO NEWSLETTER
SUBSCRIBE TO MAGAZINE