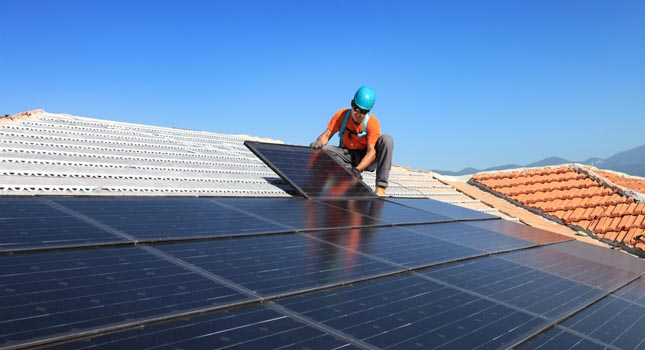 The solar energy industry is being undermined by the government’s newly proposed cuts to renewable energy subsidies, an industry figure has said.

David Hunt, managing partner of Hyperion Executive Search, a specialist renewables recruitment company, says the government’s decision to cut the amount of funding to renewable subsidies undermines any suggestion that it is a supporter of the green agenda. He also says the decision leaves the renewables industry without the backing it requires to become self-subsistent in the short term.

Earlier this year Energy Secretary Amber Rudd announced a consultation period on cuts to renewable energy subsidies, including the Feed-in Tariff (FiT) scheme, set up in 2010, that pays a set tariff from electricity suppliers to householders, communities or businesses for the power their small-scale renewables installations generate.

The government says the subsidy reductions are necessary to limit the cost to consumers who help fund them through energy bills.

In July, Ms Rudd told the BBC's Today programme: "We can't have a situation where industry has a blank cheque, and that cheque is paid for by people's bills.

"We can't have a system, which we've had up to now, where there is basically unlimited [subsidy] headroom for new renewables, including solar."

If government spending cannot be reduced to between £75 million and £100 million between 2016 and 2018/9, the only alternative left would be “to end generation tariffs for new applicants as soon as legislatively possible," the document says. This is understood by some industry experts to suggest from January 2016.

A “dramatic” impact on installers

Ms Rudd is confident that the support given thus far to renewable energy has driven down costs significantly.

"As costs continue to fall it becomes easier for parts of the renewables industry to survive without subsidies,” she said.

However, Mr Hunt says the government’s action on renewables can only be to the detriment of the industry.

“Government support was needed for another three to four years to enable a smooth glide path to being subsidy free.

“Solar is quite close to being self-subsistent for large commercial energy users, but a couple of years away at least for most domestic situations, perhaps more. Biomass and heat pumps can pretty much stand on their own in areas that are off the gas grid, but are some way off in mains gas regions,” he said.

Mr Hunt thinks the impact on domestic installers will be dramatic, expecting a mad rush to install systems before January, with installers and suppliers pushed to breaking point.

“Sadly this also brings some mis-selling and rushed, poor quality installations,” he explained. “Post-January the domestic market will be decimated.

“Of greater concern for the plumbing and heating industry is, on the back of watering down new build efficiency regulations, the RHI (Renewable Heat Incentive) is next in line for government action, with a real possibility it will be totally axed.

Mike Landy, head of policy for the Solar Trade Association, agreed with Mr Hunt that the negative effects of the government announcement will be felt immediately.

“We regret that proposals to suddenly cut tariffs combined with the threat of closure of the scheme next January will spark a massive market rush.”

“This is the antithesis of a sensible policy for achieving better public value for money while safeguarding the British solar industry,” he said.

Government is no friend of the industry

Mr Hunt, who is also chair of the On-Site Renewables Group for the Renewable Energy Association, said a report by the International Monetary Fund (IMF) revealed that the government was continuing to pour billions of pounds in subsidies into fossil fuels while slashing support for renewables.

“Let’s not forget that while UK renewables received £3.5 billion of subsidy, according to the IMF, the figure for UK fossil fuels is £24 billion. These decisions are politically motivated, and very damaging to SME business, your typical solar or heating installer.

“The medium and long term for solar is very bright, after a very tough next couple of years, but the path for renewable heat is much more difficult to predict.

“Any suggestion that this government is a friend of the renewables sector is totally shot to pieces by its continual chipping away at a sector which is doing so much good for the UK economy.

“In addition to the repeated cuts to subsidies, we have witnessed a string of unbalanced planning directives including the fast-tracking of fracking and the scrapping of the Code for Sustainable Homes which would have made all new homes more energy efficient and therefore cheaper to run for the consumer.

“Until Ministers start to wield their power more responsibly, the renewables industry will continue to see a drain of jobs, talent and tax receipts out of the UK and into the arms of global competitors.”

The government’s consultation on reviewing the FiT scheme will close on 23 October.