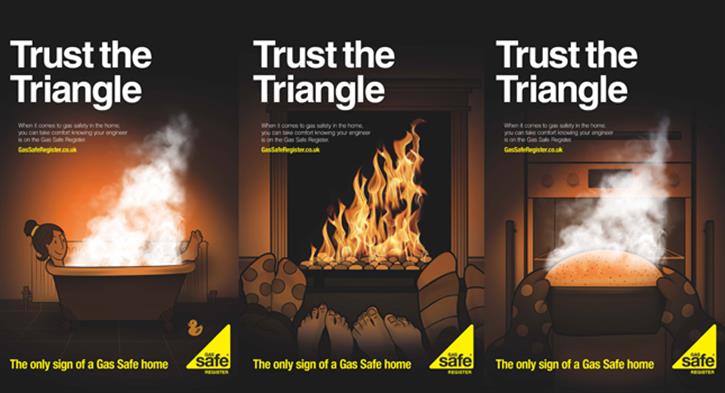 Gas Safe Register (GSR) has launched a new public safety campaign called Trust The Triangle to remind the public that the only sign of a trustworthy gas engineer is that they are registered with Gas Safe and have the Gas Safe ID card that sports the triangle logo.

Research carried out among the British public by the Register ahead of the campaign revealed that gas engineers are the most trusted of all tradespeople, followed by gas and electricity meter readers, carpet fitters, and electricians. Builders and plumbers were unfortunately considered the least trustworthy!

The research also revealed that Brits are putting their lives in danger by employing tradespeople based on their appearance and behaviours rather than their qualifications and skills to do the job. They look for politeness, good eye contact, confidence, good clothing and a nice smile. One in four people also admitted they decide whether someone is trustworthy within the first five minutes of meeting them.

These figures are a concern to Gas Safe Register as it believes millions of people could be letting unscrupulous tradespeople into their homes, particularly as Gas Safe Register estimates that around a quarter of a million illegal jobs are carried out every year by fitters who do not have the correct qualifications and cannot be trusted.

Jonathan Samuel, chief executive of Gas Safe Register, said: “We know that in the right hands gas is safe, but in the wrong hands badly fitted and poorly serviced gas appliances can be deadly and can cause gas leaks, fires, explosions and CO poisoning. With hundreds of thousands of illegal gas jobs being carried out every year in the UK, people are putting the safety of their families in the hands of people they don’t really know and whose competencies they certainly haven’t checked.

“This research highlights the importance of gas engineers differentiating themselves from cowboy tradespeople who are sweet talking their way into jobs. It is great to see Gas Safe registered engineers instilling trust in the public with your appearance and behaviour, but to make sure your customers know that you are qualified to work on gas you should proudly present your ID card when arriving at a job. Seven in 10 people say they would look for an ID card when searching for a trustworthy tradesperson anyway, so why not show them before they have to ask?”

Jo Hemmings, an expert behavioural psychologist, has reiterated how important it is for tradespeople to win people’s trust by showing them they are qualified.

“While human interaction and instinct is vital in helping people determine whether or not to trust someone, people appreciate seeing qualifications,2 she explained. “Offering credentials is the only sure way for tradespeople to prove they are trustworthy and safe, particularly for jobs which require legal qualifications, such as gas and electrics.”

Look out for the Trust The Triangle adverts placed all over the country and get involved on social media with #TrustTheTriangle.