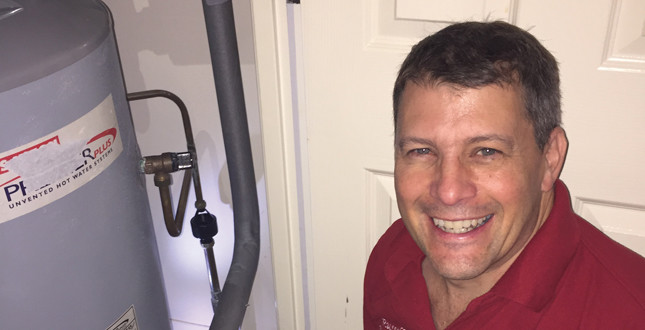 HVP spoke to Russell Armstrong, inventor of the hotun dry trap tundish, to find out how he found a niche to fill in the industry, and what makes his approach as a manufacturer different

When Russell Armstrong, managing director of RA Tech and inventor of the hotun dry trap tundish, came across a job where he needed to connect a pressure relief valve (PRV) to a macerator in an internal room, he couldn’t find anything on the market.

Previous to taking on this job, Mr Armstrong had been toying with the idea of designing a product for the plumbing industry. After thinking about this current problem, he designed a concept that would solve the issue permanently. That solution would eventually become the hotun dry trap tundish.

hotun, and its high flow alternative hotun hiflo, are patented, dry trap tundishes that allow a safe and visible means of discharge from a sealed system boiler or unvented water heater’s PRV to be compliantly connected to an internal waste or soil pipe without allowing foul odours back into the building.

After conducting some market research to find products like the one he envisioned – and discovering there was nothing to be found – Mr Armstrong commissioned a 3D-printed prototype and connected it to his cylinder at home. To his surprise, it worked.

He then began the arduous process of finding manufacturers and suppliers, designing and redesigning the product, testing parts and completed prototypes over and over until he was happy with his product.

Mr Armstrong even spent five to six weeks over a Christmas period testing springs at home to find the right trigger point and accuracy; wet and dry testing over 600 springs in total by the time he was satisfied.

This thorough and unrelenting testing philosophy underlines what being a manufacturer means to Mr Armstrong. He says that his background as a tradesperson, as well as in design and sales, is what makes him so determined to be sure that whatever he produced would be fit for purpose.

He said: “My career was broad, coming from being a draughtsman with a ductwork manufacturer, then spending five years doing a design apprenticeship, four or five years after that doing design engineering and design drafting, and then having gone into sales for about seven years before going onto the tools, all before finally designing a product.

“It’s almost as though my entire career has led up to enabling me to take a concept like hotun and turn it into a mass-produced product.”

When hotun launched in April 2015, Mr Armstrong met with Martyn Bridges, director of technical communication and product management at Worcester, Bosch Group, to chat about the product.

After running the hotun through a test on one of the company’s boilers, and discovering it couldn’t handle the flow rate that was exiting the PRV without water spilling out of it, Mr Bridges donated a boiler to Mr Armstrong so that he could develop a version of the product that could handle a maximum flow of 18 litres/min. The current version of the product was limited to 12 litres/min.

Three weeks of rigorous testing later and Mr Armstrong came back with what would become the hotun hiflo (launched in April 2016) following which Worcester, Bosch Group announced it was happy to accept use of the hotun with its boilers “providing the waste water system is capable of accepting the temperatures and pressures expected from an opening PRV”.

hotun is available in hundreds of merchants across the entirety of the UK, but it all started with one branch.

Mr Armstrong said: “When I first developed hotun, I went to Wilbonds in Derby and asked for help scouring the market to see if there was anything like it.

“When I launched the product, Wilbonds was my first stop again. They took on a small stock of the hotun and within a month were back for more.”

There’s plenty of room to grow too, and Mr Armstrong says he’s come across surprising opportunities for his product to develop, including solving problems for other sectors of the market and industries such as ice making/coffee machines and chilled and split fan coil unit drip trays. There’s also the opportunity for a 22ml inlet version of the hotun hiflo, if there is sufficient demand.

Mr Armstrong and the hotun have become well known and respected names in the industry very quickly, but there’s still plenty more to come from this design engineer/plumber turned manufacturer.