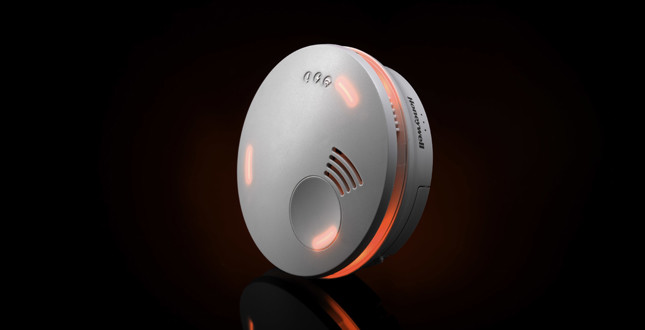 As a trusted source of home safety information, installers should raise awareness of the risks a homeowner faces by not having proper fire alarms, and provide them with a high quality, sealed smoke alarm. Adrian Keats of Honeywell explains what installers should be telling their customers.

Fire-related deaths are on the rise, increasing by 39% in 2015/16 from the year prior. About one third of these fires were in homes that had a smoke alarm that was either not operational or did not raise an alert, according to Fire Statistics Monitor.

Homes with a working smoke alarm have been found to have a death rate that is seven times lower than those without one, as they give residents the extra time needed to get out of a burning building. It’s essential that installers are clear with customers about the dangers posed by not having a functioning alarm and the importance of choosing a high quality, sealed unit.

With this in mind, we've put together our top five need-to-know points for installers to pass on to their customers:

The law vs best practice

Although landlords are required by law to install one smoke alarm per floor in any rental property they own, that requirement may not be enough based on industry best practices.

In accordance with The Fire Safety Advice Centre, there should be an alarm within 1.5m of the entrance to all habitable rooms and any cupboards that pose a fire risk – especially those within the path of an escape route.

The percentage of UK homes with a smoke alarm has jumped from 8% to 90% since 1988. This is encouraging progress, but there is no indication of how many alarms are fitted per home, whether they are situated correctly and whether they in fact are working.

What’s more, installers must also consider residents of differing abilities when advising on the most appropriate alarm system – for example, by choosing units have clear LED display alerts alongside an audible alarm to cater to the hearing impaired.

Positioning alarms correctly throughout a property is vital to ensure they provide lifesaving detection and respond as quickly as possible in the event of a fire. Every property is different, but there are some basic rules to follow when considering siting.

When it comes to siting smoke alarms, you should position the unit as centrally as possible, whether this is in an entrance hall or a room. The alarm should also be at least 30cm away from any wall or light fitting.

Alarms should also be positioned between high-risk rooms, such as bedrooms, in order to increase the chances of audibility. It’s important to stay away from bathrooms, as moisture in the air can affect the alarm’s functioning.

While a smoke alarm is undoubtedly a crucial feature of a home, in certain areas a heat alarm is more appropriate.

For instance, the kitchen should always be protected by a heat alarm due to the type of fire most likely to break out in this area. Unlike rooms featuring soft furnishings, the kitchen is most susceptible to fast flaming blazes, such as a chip pan fire.

These produce little smoke, but plenty of heat – which means a heat alarm offers greater defence as it is likely to identify the risk straight away, and give a vital early warning of the danger.

Every year more than 6 million people remove the batteries from their smoke alarms to stop nuisance alerts, putting themselves and their families at risk.

For this reason, smoke alarms with permanent, sealed batteries should always be the preferred option. Sealed alarms, especially those which can be locked to the wall, protect the alarm from damage or tampering. This is especially relevant for family homes, where younger members might attempt to remove batteries so they can reuse them elsewhere in the home, such as for a television remote.

Fitting the right alarms can help to prevent nuisance alerts completely, therefore eliminating the temptation for homeowners to remove the batteries. Ionisation alarms, although attractively cheap, are generally more sensitive to cooking smoke, such as that produced by burnt toast, than optical counterparts.

It’s important that installers recommend an optical alarm, because despite the slightly higher price point, they offer a greater level of protection as they minimise the risk of irritating nuisance alarms.

Furthermore, battery-powered sealed smoke alarms are just as reliable as wired-in models, but without the need for disruption to a home’s wiring, and without the possible risks attached to any damage that could come to a wired system. These sealed units can also last just as long as their wired-in equivalents with a guaranteed, maintenance-free lifetime of up to 10 years.

For both smoke and heat alarms, it’s important that installers communicate why choosing a well-established brand, which is properly approved and kitemarked to the relevant standard, is an absolute must. For smoke alarms the standard is EN14604, and for heat alarms BS5446.

It may be tempting for homeowners to find the cheapest option online but, when it comes to safety, investing a little more is a small price to pay for effective protection and peace of mind.

Although practising fire safety may seem obvious to experienced installers, it is vital to bear in mind that the public at large may need guidance when it comes to protecting their household. Installers can help reduce the number of casualties and generate extra revenue by helping customers to make their homes safer.