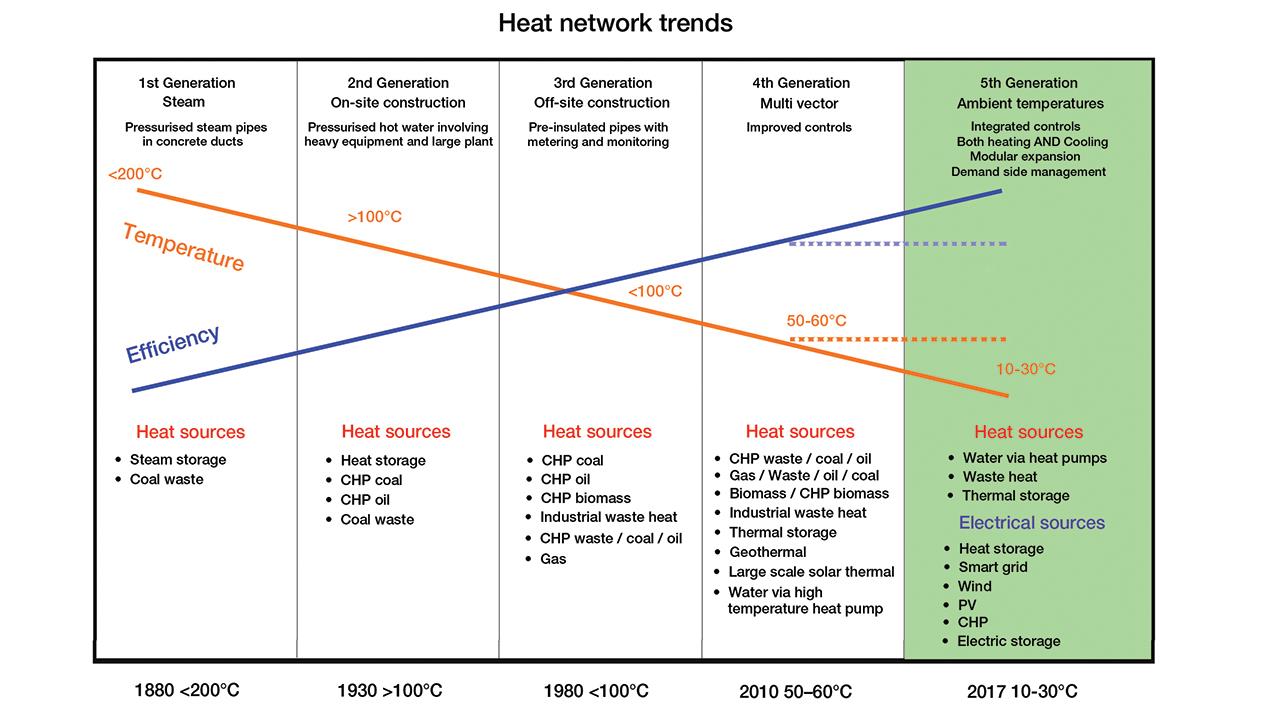 The Climate Change Committee believes that by 2050, heat networks could supply 42% of the heat and hot water in UK buildings, second only to its 52% target for heat pumps. Currently heat networks supply 2% of heat in buildings, so we have plenty of ground to cover – and work has already begun. Over £330 million in funding has been offered in the form of the Green Heat Network Fund and Heat Network Investment Project (HNIP) and, at the end of 2021, the UK government committed £19 million to expand low carbon heat networks – including five new networks across the country.

A history of heat networks

Since their steam-driven inception in the 1880s, heat networks have evolved dramatically, going on a journey of ever-diminishing network temperatures and increasing energy efficiencies.

The 200°C pressurised and coal-produced steam of the 19th century gave way to pressurised hot water at around 100°C in the mid-1900s. In the 1980s, we reached the third generation of heat networks pumps which made use of off-site construction and pre-insulated pipework, and network temperatures dropped to below 100°C.

Fourth generation heat networks developed around 2010. Their average temperatures are closer to 60°C or lower, and the heat sources continue to be CHP and biomass, but they also use gas boilers, biomass, and large-scale heat pumps.

The current design of heat networks tends to focus on fourth generation types, but we are seeing a growing number of fifth generation heat networks being developed, which will bring about a step-change in network temperatures that is driving a significant increase in system efficiencies.

A shift to heat pumps

Older fourth generation heat networks have a centralised heat generation energy centre that supplies heat outwards to buildings (or to apartments in a communal heat network). Flow temperatures are between 50°C and 60°C, and return temperatures sit at around 30°C to 40°C.

These heat networks typically supply heat interface units to generate domestic hot water and low temperature hot water for heating directly in the apartment. Cooling would be a separate system, and there is no interchange of heat between buildings or across buildings.

However, in more recent fourth generation heat networks, we are seeing a shift away from the traditional fossil fuel energy centre. These are replaced with heat pumps, which can be air source or water source, depending on the availability of a nearby source, such as rivers or waste energy.

Although fourth generation heat networks are more energy efficient than their predecessors, there are still some problems related to their use. Firstly, they are an outwardly directed energy system, so there is no opportunity for heat recovery across the system. This means that any cooling in the building will dump rejected heat directly into the atmosphere, rather than recovering and re-using it.

The reasons given for these high losses included little, or intermittent, heating demand in new apartments, yet high water temperatures in pipes still being maintained. Poor insulation of pipework and heat exchangers was also a source of losses, along with oversized pipework.

The future with fifth gen

These are some of the reasons we are seeing a growing focus on the next evolution of heat networks; a fifth generation.

The first key difference with this new approach is that network temperatures are much lower: between 10°C and 30°C. In addition, in place of an energy centre that pushes energy out into the network, there is an ambient energy loop. Water is pumped around the loop and used as a heat source or a heat sink by individual heat pumps in each building or apartment on the network.

An example of the benefits of this approach can be seen in a mixed-use building with apartments over some retail outlets and a gymnasium, where the ambient loop runs throughout the building as a heat source or sink.

Heat pumps in each apartment provide space heating and hot water, while a water source VRF air conditioning unit uses the heat network as a heat sink to create cooling in the shops and gym.

The benefits of fifth generation heat networks are clear: they make the fullest use of heat pump technology and low operating temperatures, and almost eliminate heat losses and contributions to overheating in the building. What’s more, ambient loops offer opportunities for heat recovery across the network, which provides the means to reduce energy consumption and increase efficiencies.

As we transition from fossil fuels to an electric economy, we must find ways to reduce our energy consumption. By combining these two practical, well-established technologies in a novel way, engineers can help our approach to heating evolve.

HEAT NETWORKS HEAT PUMPS MITSUBISHI ELECTRIC
Tweets by HVP
Make sure you’re on top of changes in the industry, and sign up for free to receive your monthly copy of HVP and our weekly email newsletter
SUBSCRIBE TO NEWSLETTER
SUBSCRIBE TO MAGAZINE