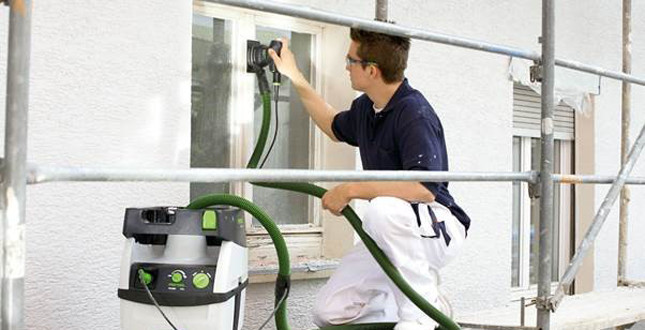 To highlight World COPD Day on November 15, Festool commissioned the survey to find out how tradespeople felt about the benefits of dust extraction.

COPD, or chronic obstructive pulmonary disease, describes a group of lung conditions that make it difficult to empty air out of the lungs because airways have been narrowed. Those living with COPD may find it difficult to breathe, and can also find everyday tasks a real challenge.

Findings from Festool’s survey also highlighted that some 20% of respondents believed that cleanliness is the main benefit to using dust extraction, ensuring customers’ properties are less impacted by the dust and fewer hours are taken up at the end of the job cleaning up.

The majority of tradespeople that responded said they use a dust extractor while working. Up to 20% of the length on any project was spent cleaning up after completion, according to one in five of those that didn’t use any form of dust extraction.

Jon Burcham, Marketing Manager at Festool, said: “The tradespeople that answered our survey were primarily made up of carpenters, joiners, furniture makers and kitchen fitters. They said using a dust extractor drastically reduced the time they spent having to clear up after projects, because the dust is cleaned up as you go, creating a more pleasant and safe working environment.

“As part of our Breathe Easy campaign, we’ve been working with the British Lung Foundation over the past year to raise awareness of lung conditions like COPD, which sadly can be particularly prevalent among people working in dusty environments.”