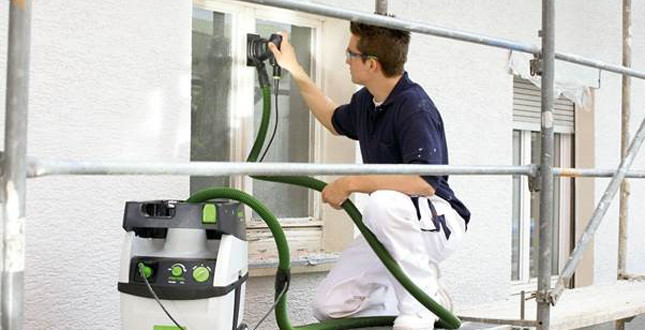 September historically sees the highest hospital admission rates for asthma, and Festool is encouraging tradespeople to take a few minutes to check their lung health.

Festool is highlighting the health effects that can come from not using adequate dust extraction as part of its Breath Easy campaign. Wood dust can cause asthma, which carpenters and joiners are four times more likely to get compared with other UK workers. Hardwood dust can cause cancer, particularly of the nose. Dust from bricks, tiles and concrete contains very fine RCS particles and serious health effects, such as lung cancer or silicosis, can result from exposure to RCS.

The company has teamed up with the British Lung Foundation (BLF), which has devised a simple online test for people who are struggling to catch their breath.

Dr Penny Woods, Chief Executive of the BLF, said: “Feeling short of breath from time to time is healthy and normal – but sometimes it can be a sign of something more serious. Tradespeople can complete our online breath test by answering a few simple questions. It will advise if they should make an appointment with their GP. It only takes about five minutes, is free and completely confidential.”

Jon Burcham, Marketing Manager at Festool, said: “Very little research has been conducted recently in the UK about links with dust and diseases such as chronic obstructive pulmonary disease (COPD) and asthma. However we have seen the headlines full of news this month about the use of disinfectants on lung health. Regular use of bleach and other common disinfectants has been linked to a higher risk of developing fatal lung disease. A 30-year study has found that those who used the products just once a week had as high as a 32% increased chance of developing COPD.

“This research shows that inhalation of potentially harmful substances can cause death. If you’re a carpenter who doesn’t use adequate dust extraction, it’s time to think about how your lung health could be suffering as a result.”

COPD affects an estimated 1.2 million people in the UK, and nearly 25,000 people per year die from the disease in England, which is the third highest death rate in Europe.

The Breathe Easy campaign from Festool also features a fundraising initiative. The company is supporting the British Lung Foundation with the sale of limited edition CoolPass Breathable cycle tops, which can be found here.

All profits raised for the sale of these tops go towards the BLF and the amazing work it does to provide help for those with lung conditions. It will also raise awareness of lung health among tradespeople who are at high risk of lung problems.