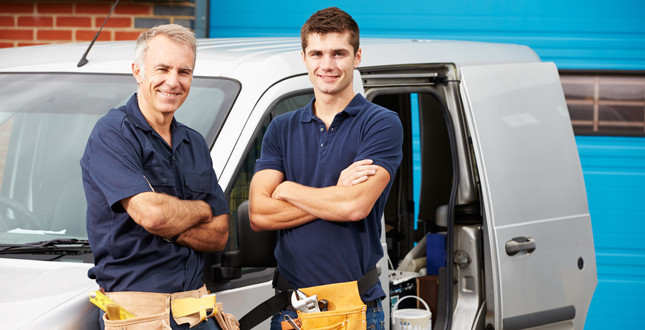 AXA study finds young men are increasingly choosing to follow in the dad’s footsteps when choosing their occupation. The building trades, in particular, have seen an increase in father-to-son firms, as Millennials value a solid ‘trade for life’ over navigating a precarious job market.

Far from being a legacy of the past, the father-to-son business is undergoing a revival, being most enthusiastically taken up by those aged 35 and under. 15% of young business owners say they took over the family firm, double the number of older people, which is 6%.

A tradesman’s son is four times more likely to follow his dad’s occupation than the rest of the population. In the building trades, 26% of people say they learnt their trade from their dad, and one in five trace their trade back to their grandfather’s generation.

The building trades have seen a sharp acceleration in father-to-son businesses over the past generation. 45% of tradesmen in the 18-35 category say their dad was a tradesman. This is compared to 23 per cent across previous generations.

Long-term job stability, was the top reason for young men to take up dad’s trade. With direct comments from the survey saying: “there is always work” and “people will always need us”.

AXA did find evidence that ‘& Daughter’ businesses are a small, but growing, tradition there too with 17% of tradeswomen say they were inspired by their dad to take up a trade.