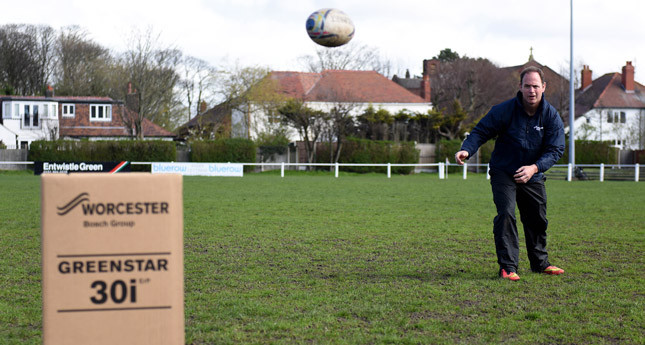 Worcester, Bosch Group is inviting installers to take on the Boiler Box Challenge, after taking ex-England stars Wayne Bridge and Kyran Bracken back to their roots for its 'Rely On' campaign.

With the campaign aiming to celebrate the things and people that we rely on every day, the heating and hot water manufacturer took the two sporting legends from the world of football and rugby back to surprise the players, parents and coaches at their childhood clubs in Southampton and Liverpool.

As well as offering pep talks and coaching sessions, Wayne and Kyran were on hand to deliver hot beverages and snacks to keep parents warm once the matches got underway. After the games, a final surprise was in store – each club being presented with a £1,000 cheque on behalf of the manufacturer.

Then, back on the very pitches where they first learned to play, the ex-pros took on Worcester's Boiler Box Challenge, which saw the former internationals attempt to chip or throw a football or rugby ball into an empty boiler box.

Now, Worcester is inviting installers to submit their own efforts. From rainbow flicks to scorpion kicks, the manufacturer is asking for the most impressive ways engineers can get a football or rugby ball into an empty boiler box – with a host of signed balls available to give away for the most creative clips.

Martyn Bridges, Director of Technical Communication and Product Management at Worcester, Bosch Group, commented: "Youth sport is an important part of local communities, so we wanted to give something back to the parents and coaches who give up their time and energy every week to celebrate their children's love of sport. Teaming up with Wayne and Kyran was fantastic, and it gave us the idea to challenge installers to show us their skills. All they need is a ball, an empty boiler box and some open space – so we can't wait to see what they can do!"

You can watch Wayne and Kyran taking on the challenge on Worcester's social media channels. Then, post your own attempts using #BoilerBoxChallenge for your chance to win a signed football or rugby ball.

Worcester is also on the lookout for deserving junior clubs to visit. Nominate a team, club or society who you think deserves a surprise from the Worcester team before Sunday 30 July at www.worcester-bosch.co.uk/rely.