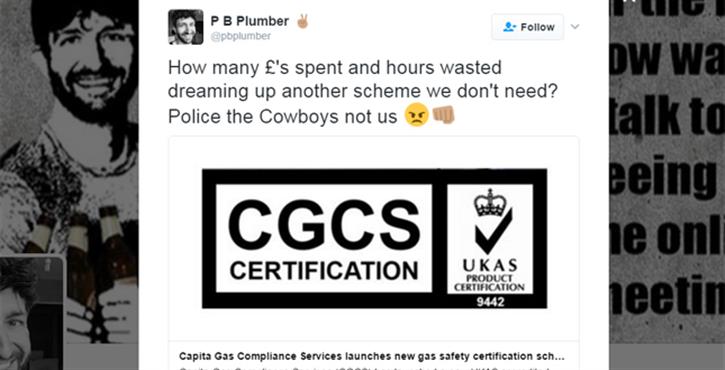 Installers took to Twitter to criticise a new gas safety certification, questioning the scheme’s value, and whether it would conflict with Gas Safe Register (GSR).

Capita Gas Compliance Services (CGCS) launched the gas safety certification on 3 February, which aims to serve as a benchmark for best practice among installers who want to “go above and beyond”. However, installers have argued this undermines the value of being Gas Safe Registered.

@AlphaTec_ @GasSafeRegister @Installermag How can you 'go above and beyond in gas safety' ????? It's either safe and to regs or it's not!!!!

HVP spoke to Matthew Hickman, managing director of CGCS, who emphasised that the new certification is a voluntary addition for installers working with gas who want to be recognised for best practice on top of complying with gas regulations.

Mr Hickman said: “The key point is that GSR is a legal requirement, something that every gas installer has to comply with. The CGCS is a benchmark of best practice for Gas Safe Registered businesses wanting to demonstrate that their work not only meets the basic standard but also exceeds it.”

Mr Hickman emphasised the separation between GSR and the CGCS certification, clarifying that although the two companies fall under the Capita umbrella, they are entirely separate entities. He also stated that there would almost no interaction or involvement between CGCS and GSR, though the end-to-end review of a business by the new certification would affect risk rating. CGCS declined to comment further on Gas Safe Register itself.