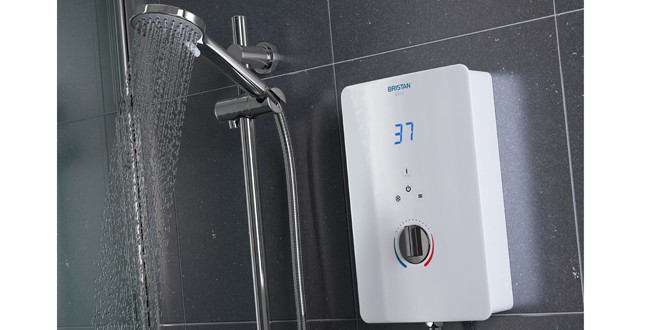 Lisa Ward provides six reasons why installers need to stay plugged in to the pros of electric showers.

With today’s consumers requiring a constant connection to the outside world through technology, it’s no surprise that an estimated 3.7 million see the bathroom as a relaxing retreat from the stresses and strains of everyday life. Therefore, it’s easy to see why bathroom makeovers are on the rise, as consumers increasingly look to spend more money making this space as comfortable and calming as possible.

And so, with consumers on the lookout for efficient, long-lasting, and attractive bathroom products, the electric shower has now come to the fore.

Whilst the positives of electric showers may once have been outweighed by their disadvantages, a new generation of electric showers is changing the game. But it’s not just about installation; the introduction of cutting-edge designs has also created a major pull for the consumer.

In light of these developments, here are six top reasons why installers need to stay up-to-date with the latest electric shower ranges.

Formerly, limescale was an inherent issue with electric units. The build-up of limescale could affect the heating element, meaning it would take more time and more energy to heat water. Over time, limescale will even shorten the lifespan of an electric product.

In answer to this, manufacturers have developed models with anti-limescale mechanisms. One such feature is phased shutdown technology. This ensures that once the shower is turned off, cold water is drawn in to cool the heater elements and prevents limescale adhesion.

In addition, a filter situated on the outside of the unit can filter out limescale particles from the water as it travels from the unit to the shower hose. These filters are designed to be easily removed and rinsed – much like a dishwasher filter. In recent years, electric shower manufacturers have also introduced rub-clean handsets to make cleaning easier for the consumer (rub-clean nozzles are flexible, so when they are rubbed the limescale breaks up) – so that’s worth looking out for when a product is being selected.

For the ultimate in product preservation, certain upcoming models will offer a performance indicator as well as an anti-limescale safeguard, which will flag when a shower needs cleaning in order to keep it in the best condition possible.

In the past, electric shower installations were viewed as problematic, with many older units providing few water and cable inlet points – the location of which often varied between models – meaning a new shower could mean extensive retiling work.

One size fits all

Additionally, most electric showers will have a footprint that will comfortably fit over the wall fixings of other manufacturers’ showers, as well as a riser rail with an adjustable bracket, which will cover the majority of previous fixing holes. This level of adjustability not only saves time for the installer, but also means they can carry electric models in their van, confident in the knowledge that it will be suitable for any replacement job.

It’s not just what’s on the inside that counts

Traditionally, customers viewed the electric shower very much as the kettle of the bathroom - all function, no flair. However, in today’s market, you don’t have to look far to find a sleek, slimline electric shower which bears no resemblance at all to the drab boxes of the past. This new streamlined generation of electric showers offers consumers a choice of designs, colours, and looks which can easily rival their mixer counterparts.

For consumers with safety concerns, thermostatic electric showers that offer the same safeguard against scalding as a traditional mixer are now available, and even better, they needn’t be expensive, with the Bristan range pricing the same as non-thermostatic models.

Electrics have improved in terms of functionality too, incorporating clever technology to make life easier for the user. For example, all of Bristan’s electric showers, excluding Smile, include a digital display so users can choose their ideal temperature or setting, coupled with a warm-up mode to make sure it’s reached before getting in the shower.

In order to meet consumer demand, installers must ensure they stay up-to-date with the latest electric shower developments and ranges as they hit the market. In doing so, they can ensure that they can confidently recommend options that match the needs of the consumer both functionally and aesthetically, leading to happier customers and repeat business for the installer.