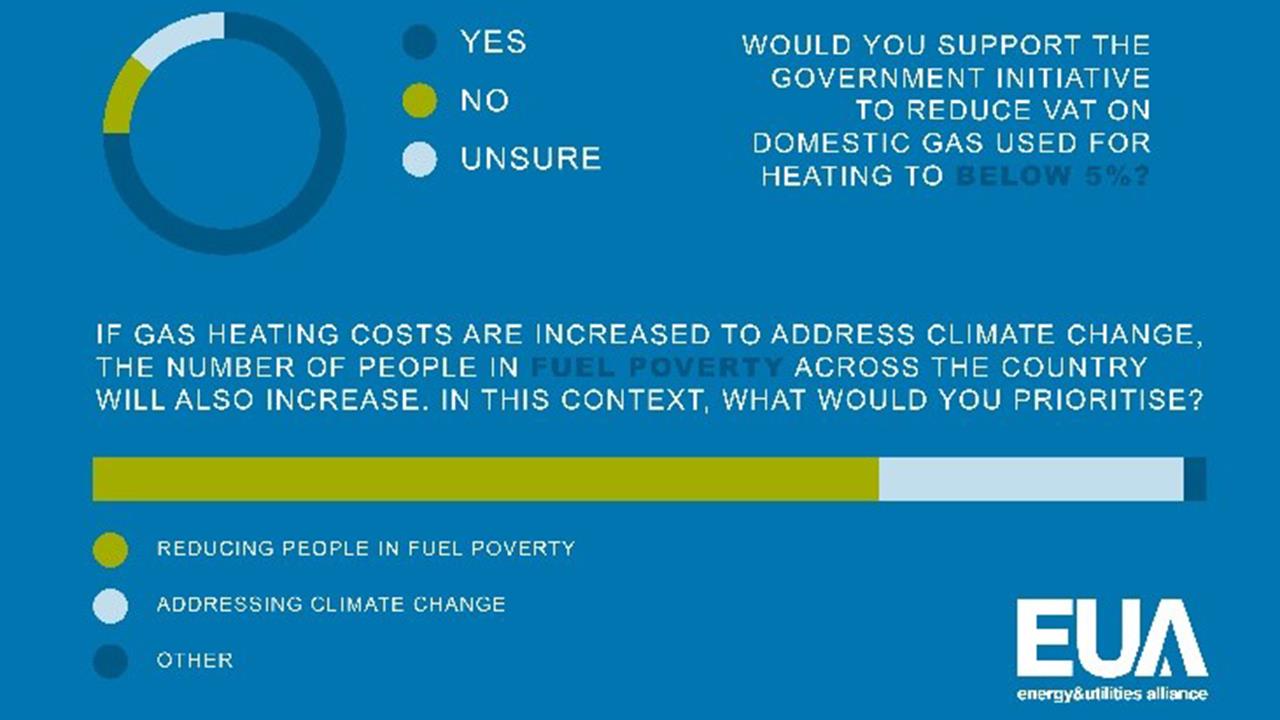 The Energy Utilities Alliance (EUA) has warned government that it faces major public backlash if it attempts to use an increase in domestic gas prices as a way of forcing homeowners to buy low carbon heating appliances in own homes.

A consultation is due to launch shortly which is believed will propose an increase to gas prices to encourage consumers to ditch their gas boiler in favour of an electric alternative, such as a heat pump. However, a new survey of homeowners has found that the public is adamantly opposed to this approach, with predictions of a public backlash made by some senior politicians, highly likely.

It has found that four in 10 voters (40%) would be ‘less likely to vote’ for a government that announced an increase in the price of gas as a way of encouraging people to switch from boiler to heat pumps.

In an added twist, nearly eight in 10 (76%) would support reducing VAT on domestic gas, something that was promised by senior ministers during the Brexit campaign, as European Union rules on VAT no longer apply.

Mike Foster, Chief Executive of the EUA, who commissioned the online research of 2,000 homeowners, says a move to increase levies on the price of gas would be a kick in the teeth of hard-pressed consumers who are still smarting over the breach of trust around VAT not being cut.

“During the referendum campaign people were promised that, if we came out of Europe, we would be able to set our own levels of VAT on domestic fuel and that this would allow the government to reduce VAT and effectively cut fuel bills. They have been let down.

"But to make matters worse, Whitehall officials are now planning to force the price of gas up, to encourage consumers to rip out their gas boiler in favour of a £10,000 heat pump.

"Some politicians get it. Others need to start taking back control from Whitehall officials who are planning to make politicians look ridiculous. Far from cutting gas bills, they are set to increase. It will be a gross breach of trust and a very reckless political move for any political party to make.”

Gas is currently the most popular fuel for heating, hot water and cooking in UK homes with more 21 million households on the mains gas network.

Mike added: “I would remind the government that gas users are also voters. 21 million households on the gas grid, the majority of which are multi-occupancy, equates to a huge number of voters who are the recipients of heat and hot water from a boiler. The reaction from the public when the energy companies put up their prices should act as a warning to ministers.”

The research also reveals that while the public support efforts to combat climate change, nearly three-quarters would prioritise fuel poverty over action on climate change.

Mike concluded: “I believe the public supports efforts to deal with the climate crisis but not at the expense of plunging more people into fuel poverty. If the government does force up the price of gas, it is vital that the fuel poor are supported. And if a carbon levy is placed on gas, let’s ring-fence the proceeds to make sure they are used to incentivise the investment in the hydrogen economy the government is keen to talk about.

“Yes, we have to deal with the climate emergency, but the public wants a thought-through strategy not a knee-jerk tweaking of gas prices that will impact the poorest in society and do nothing to encourage the uptake of low carbon heating technologies.”