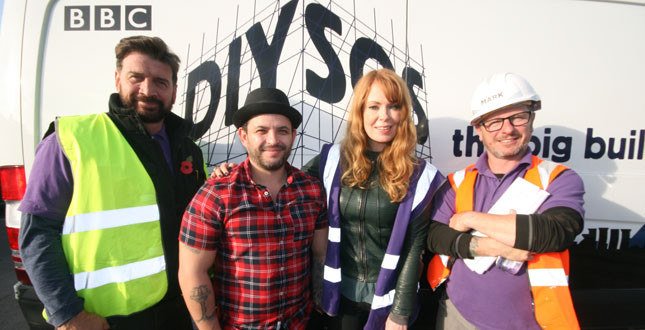 Two years ago, a "landmark" plan to create a community for war veterans in east Manchester was approved by Manchester City Council.

The aim was to create a veterans' housing "village" within the existing Newton Heath community, with disabled access to homes and disabled parking. In September 2015, the BBC’s DIY SOS: The Big Build team moved in to refurbish eight derelict properties, with a little help from Princes William and Harry.

This bespoke final home is being delivered as part of this award-winning development in east Manchester by the BBC’s DIY SOS team, Manchester City Council, charities Haig Housing Trust, Walking with The Wounded and key contractors Kier, Wates, Arcus, architects BTP plus hundreds of generous volunteer contractors and suppliers.

It was a nine-day build and manufacturers and tradespeople were on hand to give their products and skills for free. Intergas was delighted to work with the DIY SOS team to create a heating system that will provide Simon’s heat and hot water. Its flagship Eco RF 30 boiler was selected for a variety of reasons, but the primary one being its remote monitoring facility. It comes fitted with a radio frequency module, which sends and receives information wirelessly between the boiler and installer. So now Drew Styles, the P5 heating engineer who worked with Pemberton Plumbing Heating and electrical Services on its installation, will be checking the Eco RF’s performance from his phone and computer, and make any adjustments necessary remotely.

The Eco RF retains all the benefits of the original Intergas boiler design: the two-in-one heat exchanger removes the need for a diverter valve, valve motor, auto air vent and secondary hot water plate heat exchanger, so all the components that stick, leak or let your down aren’t there; it condenses 100% of the time in both heating and hot water modes, making it’s super-efficient; and vacuum insulation, which keeps heat and energy losses to the minimum and ensures whisper-quiet operation, will keep Simon’s energy bills lower still. It’s estimated that the Eco RF will cut carbon emissions by 20% and shave a further 5% off energy bills over other condensing boilers.

An appointment was made for Intergas Business Development Manager, Mark Prescott and Drew to show Simon how to use the Intouch app, a free app for the ECO RF, which turns your smartphone into a smart thermostat. But Simon was ahead of them and had already set it up. “The instructions were very straightforward and Intouch is easy to operate. When Mark and Drew arrived, they checked I’d done everything correctly – I had – and then took me through the boiler operation,” said Simon.

Simon will be able to control every aspect of his central heating when he’s not at home. And he’s also now more in control of his destiny and is planning to fulfil his dream of becoming a fitness trainer to fellow amputees, helping them to re-build their lives. Simon and other veterans in Newton Heath are supported by veterans’ charity, Walking with the Wounded. To make a donation, please visit: www.walkingwiththewounded.org.uk

Simon, a Corporal in the Royal Green Jackets – an infantry regiment in the Light Division – lost his foot and suffered other severe injuries when the vehicle he was in was hit by an improvised explosive device during a patrol.

After leaving the army in 2008, he met his partner and had three children. Things were looking up, but Simon was struggling to adjust to civilian life as a disabled person and his relationship eventually broke down. He found himself and his children in an unadapted two-bed house, sharing one of the bedrooms with his youngest son. The house was in a very poor state of repair, which he tried to make more homely using free furniture, and in an area that he didn’t feel was safe.

He’d reached the stage where he just wanted a fresh start, in a home adapted to his needs, where his children would be safe and where he could be among other families and veterans who have been through life-changing events too. In November Simon’s fresh start began.