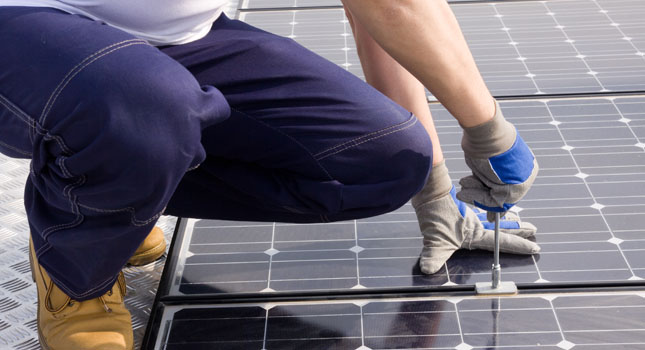 Thousands of jobs could be at risk following government plans to slash the Feed-in Tariff (FiT) rates for solar PV by up to 87%, NICEIC and ELECSA have said.

The cuts, due to be implemented in January 2016 and reported in HVP earlier this month, would see FiT payments for new solar panels drop to less than 2p per unit of electricity. This means homeowners would receive up to, on average, £190 less in subsidy payments annually, compared to current FiT rates, the organisations have said.

Regulatory body for electrical contractors NICEIC, and contractor certification body ELECSA, believe this reduction could have a significant impact on demand for solar photovoltaic (PV) technology and further consequences for those working within the industry.

“The Feed-in Tariff played a major part in making solar PV an attractive option for many householders,” said Dani Putney, renewables specialist at NICEIC and ELECSA.

“It has always been accepted that the tariff would need to be revised in line with falling installation costs, but at the proposed rates homeowners would have to wait decades before they would see a viable return on investment.

“To suddenly pull the plug on funding in such a drastic manner could have a dramatic negative effect on the market and potentially put thousands of jobs at risk.

“The Department of Energy and Climate Change (DECC) has admitted they are unable to quantify how many business will be affected.

“We would urge all those working in the sector to respond to the consultation and voice their concerns about the potential impact of this decision.”

“We believe there are some alternatives the government could consider to safeguard the long-term future of the industry. We will be consulting with our members on the best options going forward before making our official response to government,” Ms Putney added.

The DECC said the cuts were necessary to halt a £1.5 bn overspend on renewables. It also suggested that subsidy payments could be halted entirely in 2016 if costs could not be controlled.

Responses to the consultation are being accepted online via: https://econsultation.decc.gov.uk/office-for-renewable-energy-deployment-ored/fit-review-2015