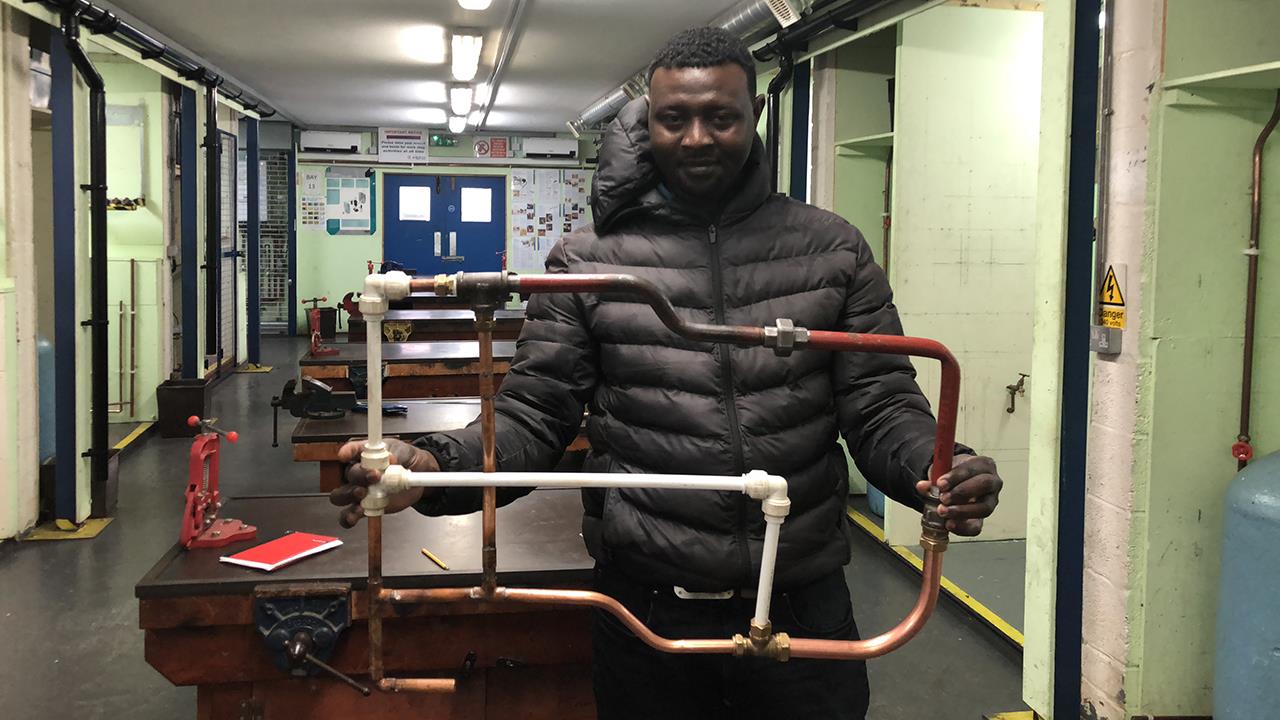 Seven homeless men and women are on their way to becoming plumbers, after members of the public donated more than £25,000 to help them get on their feet.

So far, seven homeless people have chosen to complete their plumbing diploma at one of London's largest training providers in the building and engineering skills sector. The £25,000 raised will cover their plumbing diploma course fees, as well as associated costs including childcare, travel, tools, and safety gear.

One of the people that Beam has supported is Mutaz, a 29-year-old Sudanese refugee who was granted asylum by the UK government. But when he arrived in the UK, he had nowhere to live. While he was living on the streets, homelessness charity St Mungo’s helped him into temporary accommodation, and then referred him to Beam. Mutaz went on to raise £4,180 from 366 supporters to do his plumbing course. After completing his training five months ago, Mutaz is now looking for full-time work.

Mutaz said: “Plumbing is a trade I did many years ago in my home country. I know I can do it well and enjoy the process of fixing things. Now I have the relevant qualifications, I can’t wait to start working and finally move into my own flat.”

Another homeless individual who has crowdfunded to become a plumber is 26-year-old single mum Emily, who had to stop working when her son was born. Without her wages, she couldn't afford the rent on her flat and had to move into emergency accommodation for two years. Through Beam, Emily was able to raise £6,360 from 389 supporters and is currently looking for work as a plumber.

Emily said: “I wanted something I could thrive in so I chose plumbing! There's demand for female plumbers as lots of people want women working in their houses. Some of my friends were a bit surprised when they heard. Maybe some people still think it's just a job for men. But I don't mind getting my hands dirty and I believe I have what it takes. My dream is to rent my own place and not have to keep moving around. I'd love to make it into a beautiful family home. When I heard about Beam I thought this is my chance to turn my life around and become someone - the role model to my children I've always wanted to be.”

Gary, aged 51, is currently in the middle of his plumbing training. Before being referred to Beam, he spent a long time moving around the US, Canada, Mexico, and the UK, seeking out jobs in security, heavy lifting, moving, and demolition. However, when he returned to the UK full-time, he found himself homeless with no job prospects. He was sleeping on the streets when a homeless charity helped him find a place to stay.

Gary said: “I'm really looking forward to learning something new, a skill that I can take with me anywhere in the world. Helping people really makes me smile, and I like fixing things with my hands, so I think that training to be a plumber is a great next step for me. Getting back into work will help me keep moving forward, closer to a better life. It will help me save for rainy days, and for a nice home and a car. I'll be able to take care of myself, my own responsibilities and my own bills. I'll enjoy life again. And then, in a couple of years, I can try giving back to others.”

Another individual in the middle of his training is Adam, aged 35. He became homeless five years ago after a relationship breakdown. He was sleeping rough on and off, staying on buses, sometimes sofa surfing and staying with others. He was placed in emergency accommodation and, from there, was referred to St Mungo's and later Beam.

Adam said: “I’ve completed general construction training but would like to specialise in plumbing now. I was always interested in plumbing in school but just never had the opportunity to pursue it.”

Alex Stephany, founder and CEO of Beam, said: “We’re excited to place some highly-trained and highly-motivated people like Mutaz and Emily with employers in the plumbing industry, so that they can truly reach their potential. In the process, we will provide the plumbing industry with a new and diverse talent pipeline.”

If you’re interested in employing trained plumbers through Beam, the organisation asks that you get in touch at hire@beam.org.