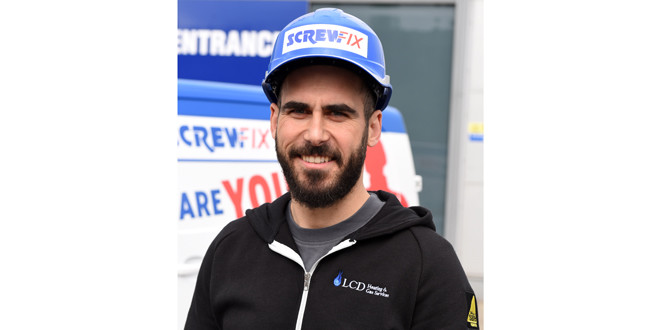 Lluis Dalmau, a plumbing and heating engineer from Clydebank, has been announced as the winner of the Screwfix Britain’s Top Tradesperson 2017 competition.

The 42-year-old beat thousands of entries to land the Screwfix award. As well as being crowned the best of the best, he also received the keys to a new Toyota Hilux or PROACE vehicle worth £32,000.

Lluis, who trades under the name LCD Heating and Gas Services, started in the industry 26 years ago and has never looked back. He prides himself on his customer-focused mindset by working around the clock to help with customer queries, and his passion to better his skills through continued investments in new technologies.

Lluis said: “It is an absolute dream come true being crowned Britain’s Top Tradesperson. I was so shocked when they told me I had won!

“When I arrived on the day I remained confident and just spoke to the judges about my continued passion to better my skills and the trade and discussed with them my customer service skills which have led me to be successful all these years. I can’t wait to share the news with my customers and collect my new Toyota vehicle; it’s going to make me stand out from the crowd when I arrive at a job!”

Britain’s Top Tradesperson is a search held by Screwfix annually to find and recognise the best in the trades, from bricklayers to carpenters, handymen, electricians and plumbers that keep the UK’s homes and businesses in top condition.

During the final, judges look for the tradesperson who impresses them the most with criteria such as devotion to their work, going above and beyond for customers, and outstanding skills.

Graham Smith, Screwfix Marketing Director, admits that they were overwhelmed by the high quality of entries. He said: "This is the eighth year that we have run this competition, and it just keeps on going from strength to strength.

“Over 5,000 tradespeople entered from across the UK and it was a very difficult task to shortlist the finalists, due to the talent and skills of those who participated, and then to choose only one overall champion – it was tough! Our winner Lluis, showed us his passion for the trade and commitment to bettering the industry. He really impressed us with his professionalism, qualifications and exceptional customer service. Once again, we have a hugely deserving winner who represents all that is great about the UK’s tradespeople.”