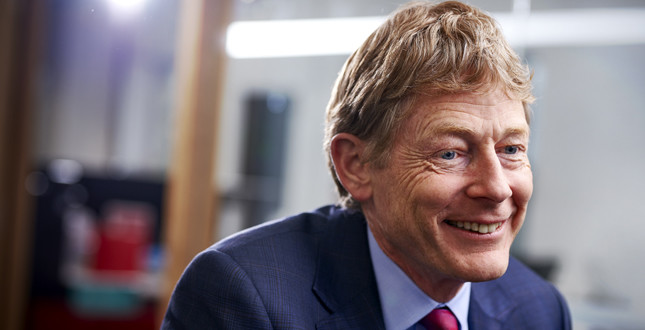 HVP spoke to Richard Harpin, Chief Executive of Homeserve, to find out what changes the company is making and how this will affect Checkatrade members across the UK.

As part of what Richard has called a need to evolve the company, Checkatrade will be introducing a new range of features before the end of the year alongside a new, flexible pricing structure.

The new pricing structure means tradespeople can now pay monthly, and will fall into a range of price categories based on the volume of traffic to their Checkatrade profile and which trade they are in, from £69.99 to £99.99 per month.

Richard said: “What we want to do is come up with a fairer pricing model, and also a way of tripling our marketing investment with the aim of doubling the business and generating more work for our existing and future members.”

This new pricing model will allow Checkatrade to increase its marketing expenditure from £5 million to £15 million over the next 12 months. Richard says this will allow the company to increase exposure on TV, darts, and TalkSport advertisements, as well as increasing local directory leaflets from 30% of the UK to 80%.

Perhaps the most controversial new Checkatrade feature is Managed Contacts, which Richard puts down to a simple misunderstanding. He said: “This is not about us taking the calls, they go straight to [the tradesperson], but what it does do is allow them to see the value they’re getting for their money every month.”

With Managed Contacts, Checkatrade assigns a local number and web domain to the tradesperson, which redirects contacts to the tradesperson directly, while tracking the numbers and eliminating spam. During the testing period in the Birmingham, Coventry, and Stoke areas, Richard says they recorded an average of 28 contacts per tradesperson per month.

There will be the choice to opt out of using Managed Contacts, but tradespeople who do will be placed into the highest price category, at £99.99 per month.

Also newly launched is a ‘buying club’ for members, where Richard says tradespeople will be able to save from £50-£100 each month through deals on fuel, insurance, tools, and more. New deals will be added every month. A new Checkatrade app will also be launched in October to help members manage jobs, and produce quotes and invoices for customers.

Additionally, Checkatrade Now is currently under testing in Hampshire, a new feature where the fastest local tradesperson to respond can take on emergency jobs for customers who need work done immediately.

Some tradespeople were surprised to see their Checkatrade profiles duplicated on the Homeserve website under Homeserve Home Experts, as part of the company’s efforts to push Checkatrade members to Homeserve customers who need help outside of the scope of the service. However, due to negative feedback, Richard says this will likely become a direct link to the Checkatrade website.

Originally announced as a team of six, Richard has announced the upcoming ‘members committee’ of tradespeople will be expanded to a total of 12, and that recruitment is well underway. This group will take part in quarterly or bi-monthly meetings, as well occasional conference calls, in order to help shape the direction of the company and provide expert feedback from members on the ground. The members of this committee will be paid for their time, and outcomes of the meetings will be made available to Checkatrade members.

Don’t miss the full details of our interview with Richard in the upcoming September issue of HVP.