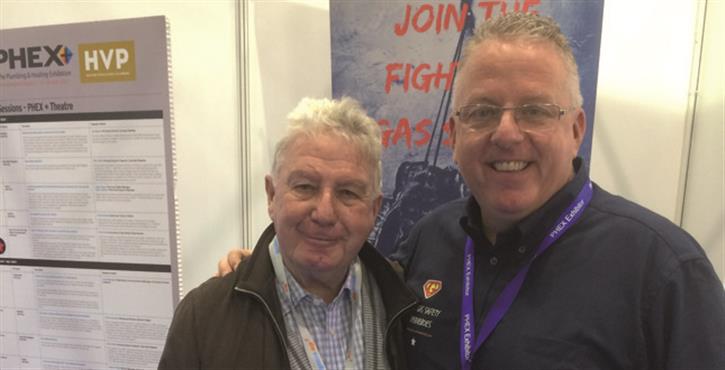 As the Gas Safety Superheroes campaign continues to gather pace, HVP sits down with co-founder and installer Paul Hull to find out why he is keen to effect real change within the industry.

Installers have been calling for more to be done to promote the importance of gas safety for years. Now, a band of installers has come together to help get that message out to the general public.

The Gas Safety Superheroes campaign began during Gas Safety Week 2016, when commercial plumbing and heating installer Paul Hull, along with fellow installer Peter Booth, Charlotte Taylor and a team of supporters including Twitter's @GasManGod, banded together to campaign for real change.

“The Gas Safety Superheroes campaign was started to improve apprenticeships and standards throughout our industry,” Paul explained. “If we all work together – installers, manufacturers and merchants – we can change things for the better.”

Paul Hull has been working as an installer for over 30 years, after undergoing a four-year plumbing apprenticeship in 1986. Since then, he has worked extensively across the domestic and commercial sectors, and is now Managing Director of The Industria Group. During that time, Paul believes there has been a significant drop in training and standards across the industry, which the Gas Safety Superheroes campaign is trying to address.

“I think we’ve let down a whole generation of engineers through poor training,” he said.

“At one time, engineers were highly regarded, but the industry has been cheapened by fast-track courses and that perception has now changed – apprenticeships have been devalued.”

Paul believes the industry must urgently tackle this problem, and that one step forward could be to stop the fast-track courses that promise to turn a novice into a fully-qualified engineer in just a few weeks.

“We have to slam the door shut on those courses,” he said. “While admittedly I’ve seen some engineers from the fast-track courses who have been brilliant, and some who have done a full four-year course and been rubbish, in general the problems that you find across the industry repeat because the engineers who have done the fast-track courses don’t have the background knowledge you need. When I did my four-year City & Guilds course, there was no shortcut.”

“We need to get to the point where a properly-qualified engineer is considered at the same skill level as someone with a degree. The industry has to tackle this perception that plumbing is not a skilled trade,” he added.

Paul also wants to see the introduction of annual training requirements along the lines of the Continuing Professional Development training already seen in some other trades.

“The only way to tackle the guys who cut corners is by stricter regulation and better education,” he said.

One way in which Paul believes gas engineers can help to change public perception is by always showing customers their Gas Safe Register card, whether they’re asked for it or not.

Despite being a qualified gas engineer for many years, Paul said he has only been asked for his Gas Safe Register card once in the last 10 years, and then only because the customer was someone who had worked alongside the industry and knew of the scheme.

The Gas Safety Superheroes have taken to Twitter using the hashtag #regardthecard to ask installers to show their cards as a matter of course, and to encourage them to post pictures of their work.

“The public are not aware of the card but if engineers show it, we can help raise standards. We all work hard for the card, we re-qualify every five years – we should be proud that we’ve achieved it.”

Another change Paul and the Gas Safety Superheroes want to see is the creation of an industry-wide boiler servicing standard that all registered gas engineers must adhere to, regardless of which boiler model they are working on.

“If I asked 30 engineers what you should do when you service a boiler, I’d probably get 30 different answers,” he said. “Every manufacturer’s boiler is slightly different and recommends different things from the services. Some say check burner pressures, others pressure speed, but certain things are mandatory. The case has to come off, the condensate trap be cleaned, check the radiators get hot and check the system performance.

“Engineers shouldn’t just be checking the flue gases and wiping down the case. A simple checklist and a general, standardised industry-wide guide, which could then be adapted for each manufacturer, would make such a difference.”

Paul wants mandatory annual servicing to help fight carbon monoxide (CO) poisoning cases, in a similar vein to the vehicle MOT, so that consumers understand the importance of having their boiler checked.

“Annual servicing would become standard practice overnight if the manufacturers enforced it as part of the warranty,” he said. “If you get your boiler serviced each year then you know it’s safe and it’ll last longer. In 2017, nobody should be dying from CO poisoning – it’s completely avoidable.”

These kinds of fundamental industry changes are certainly ambitious, but Paul firmly believes they are achievable if installers work together. “I want to leave this industry in a better state than I found it,” he explained.

“There is definitely a movement among installers now that they want these things to change, and I don’t think it would take that long. There are some really easy things that we could all do which could change a lot of perceptions within as little as six months. People say that’s a bit ambitious, and that Rome wasn’t built in a day, but I say; I wasn’t on that job!”

More information about the Gas Safety Superheroes campaign can be found online at www.gassafetysuperheroes.com or on Twitter @SafetySuperhero.