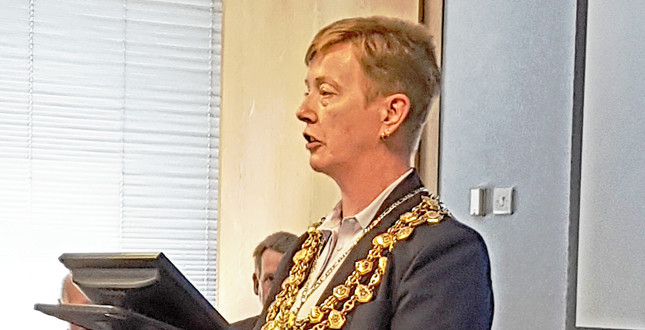 Tracey Richardson has been elected as the Chartered Institute of Plumbing and Heating Engineering’s (CIPHE) first female National President, while EurIng Christopher Northey CEng FCGI FCIPHE RP was voted in as Vice President.

The appointments were announced at the CIPHE’s Annual General Meeting on 29 June, held at United Insurance Brokers in London.

In her address, Tracey spoke of her journey in the industry to date, her experience entering further education as a plumbing lecturer, along with her concerns for standards within FE teaching. She said: “The quality of delivery in some colleges worries me and I have often raised this concern to others. Don’t get me wrong, some colleges and centres do a really good job, but it appears that we are coming across quite a few that are falling well short of the mark.”

After discussing some of the issue surrounding the Trailblazer apprenticeships and the fears that some areas of the plumbing industry are being ignored, Tracey moved onto the issue of experienced workers, who hold knowledge and skills but no formal qualifications.

She continued: “If we want to address the issue of getting our industry more regulated, and helping those with ‘Granddad’s rights’ to gain formal qualifications in the smoothest way possible, then this in turn should also possibly go some way towards addressing the issues surrounding the ‘cowboy’ plumbers.

“It’s quite a scary thought that anyone could enter a customer’s house and call themselves a ‘plumber’ with no formal qualification to back it up, and very few customers would be bothered to check. This is one of the key areas I would like to try and help address in my term in office.

“I feel extremely proud to be our Institute’s first female President, but I don’t want this to detract from the role. Yes, I would love to see other women following my lead and yes I do want to encourage more females into the industry, but simply by using a subtler approach of just showing there are no barriers to what you can achieve in life, only the ones you put there; but that rule applies to anyone – male or female.”