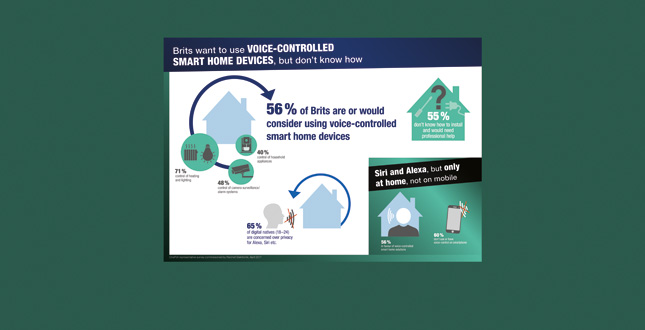 Over 50% of Brits would consider using voice-controlled connected devices in their home, but most would need professional help to install them, according to research by online electronics retailer, reichelt elektronik.

The research suggests that installers already fitting smart heating control technology could add a lucrative new revenue stream to their business by offering to fit other voice-controlled connected devices as well.

The enthusiasm for this type of technology in the home is apparent with the success of systems like Amazon Alexa, Google Home or Microsoft Cortana. While 50% percent of respondents said they would consider installing a voice-controlled solution, 6% already use the new technology in their home.

However, most of them (55%) don’t know how to install these types of products and would need professional help, providing installers with a potentially lucrative new revenue stream.

In the case of voice-controlled home automation solutions, the desire to operate heating and lighting either automatically or remotely is the first priority (74%), closely followed by camera surveillance/alarm systems (48%), and kitchen and household appliances (40%).

Across Europe, the trend is similar. reichelt's research found that most German (70%) and French (63%) people surveyed felt the same as the British about the technology, however about half of Germans would do it themselves.

Of the 30% who wouldn't consider using devices like Alexa, Siri or Google Home, this was due to concerns over data protection. This is especially striking in the age group of the 18- to 24-year-olds, among whom 65% of those who wouldn't purchase these devices clearly state privacy concerns (65%).

reichelt commissioned One Poll to conduct the research of 1,000 adults across UK, Germany and France, during April 2017.