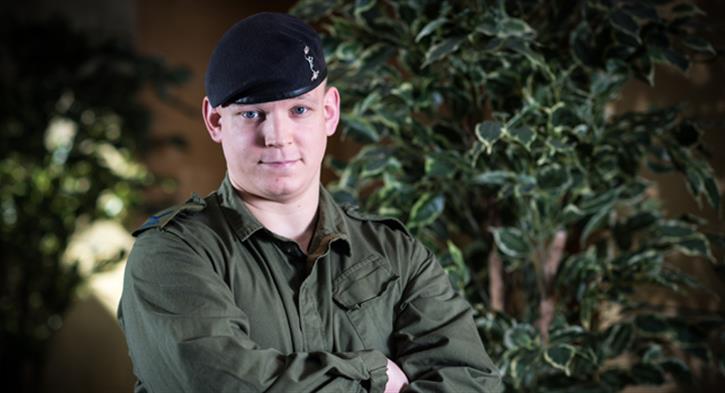 Plumbing apprentice, John Cameron has been chosen as an ambassador for the British Army’s apprenticeship programme, to help highlight the fact that the Army runs the largest employer apprenticeship scheme in the UK, providing career enhancing qualifications to the next generation of plumbers.

The announcement comes as research commissioned by the British Army shows more than five in 10 people are not aware of the engineering roles, such as plumbing, available with the Army.

The survey also found that apprentices are happier with the training and development they are offered in their careers than their peers who have graduated from university or who are doing internships.

One in three apprentices questioned as part of the survey said that the financial investment in their training and personal development by their employers was the highest source of career satisfaction for them, compared with just one in 10 graduates and interns who said the same. In fact, nine in 10 graduates and interns feel that the cost of professional qualifications is holding them back in their careers, more than any other job level.

Sapper John Cameron, 26, is studying a Level 3 NVQ in Plumbing. As part of National Apprenticeship Week, he was selected to attend a celebratory event at Army headquarters led by the Adjutant General, which brought together apprentices from across the country to showcase each of the 47 apprenticeship programmes the Army runs.

“Before joining the Army, I had a Level 3 NVQ as an electrician - now I am on an Army apprenticeship programme where I am training towards a Level 3 NVQ in Plumbing,” he explained. “My NVQ will be recognised by civilian companies so it’s reassuring to know the training I’m receiving is for life, not just for the Army.

“I’ve also become a lot more confident and have higher standards for myself since working on my Army apprenticeship. It’s not just about the hard work though. The Army gives you the opportunity to travel the world and meet some amazing people along the way.”

When asked what was missing from their careers, the top response among apprentices was a clear long-term career plan (39%), ahead of the chance to travel (27%) and a challenging and exciting role (13%).

The British Army, which has over 40 different apprenticeship schemes for specialists including catering, IT, bricklaying, logistics, construction, engineering and animal care, gives paid training to all its apprentices and offers a clearly defined career path, with a good salary and regular opportunities for promotion. It also has unparalleled opportunities to travel with work and offers challenge and excitement.

Over 5,500 Army apprentices are set to complete their training this year alone, and around 20,000 are currently going through the Army’s apprenticeship programmes.

Brigadier John Ogden, director of operations, Army Recruiting Group, said: “The Army provides world-class training in a range of exciting roles, whether you have ambitions to be a chef, an engineer, a mechanic, a welder or a IT Specialist. Our apprentices get unrivalled opportunities to travel the world, take part in adventurous training and earn a good wage, while benefiting from a high level of personal investment and training that very few other employers can provide. Our unique offer means our apprentices can grow their confidence and gain qualifications, which apply to civilian careers, and knowing they’re doing something meaningful with their lives.

“No matter what your background the Army has something to offer you, whether you’re a school-leaver or not planning to attend university, and our apprenticeship success rate typically exceeds the national average by 15%. With unemployment among young people still very high, the Army is playing a significant role in providing the younger generation with skills for life.”

National Apprenticeship Week runs from 9 to 13 March 2015 and celebrates apprenticeships and the positive impact they have on individuals, businesses and the wider economy.

More than 100 Army recruitment events are taking place across the country this month, to give people who might be interested in joining the Army as an apprentice the chance to find out more. Ranging from jobs fairs to school visits and from webchats to skills presentations, local Army soldiers and officers will be on hand to answer questions and advise potential apprentices of all trades how to apply.

The Army will also be running extended opening times at selected Army Careers Centres (ACCs) on Saturday 14 March. 14 ACCs throughout the UK will be extending their opening hours from 10.00 to 17.00 (09:00-17:00 for ACCs in London and East), to make it easier for potential apprentices to speak with Army recruitment officers about the 47 different apprenticeship programmes available.

For more information about the exciting and rewarding apprenticeship programmes available with the Army, visit www.army.mod.uk/jobs, search Army Apprenticeships or call 0845 600 8080.