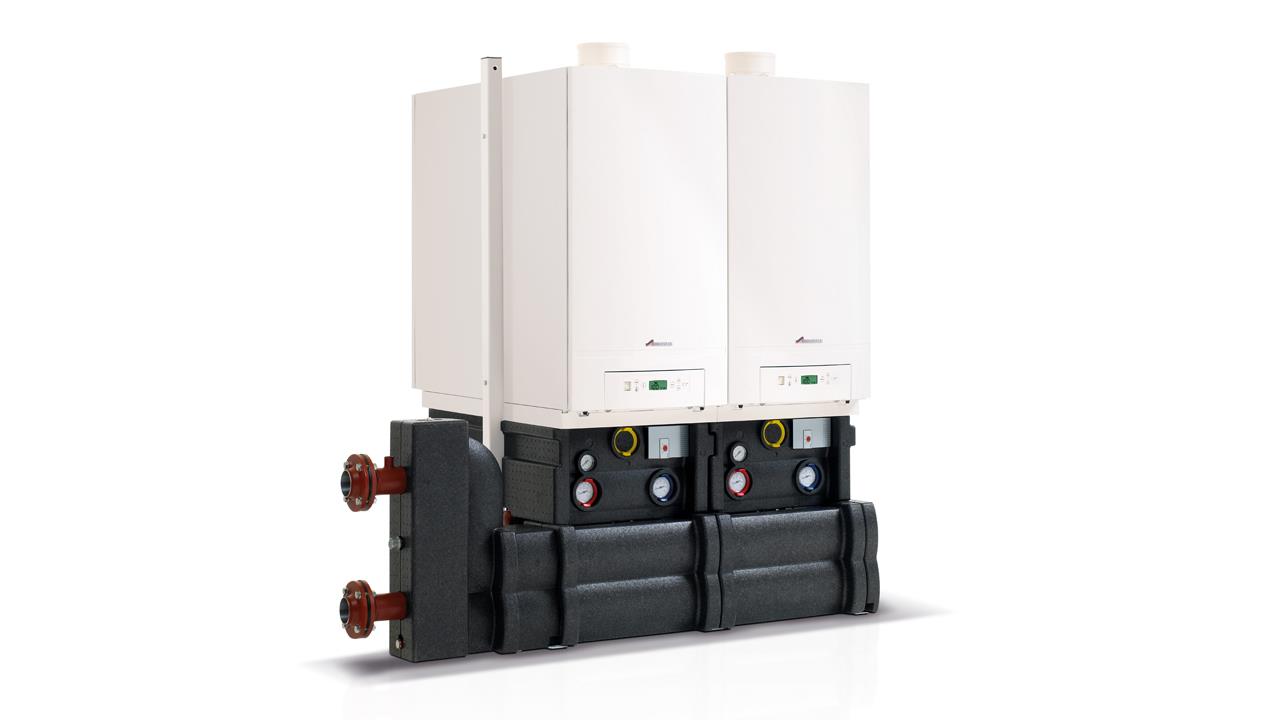 Here is an outline of some of the key benefits of boiler cascades as a part of a modern plant room installation.

Years ago, a robust heating system traditionally required a large and heavy boiler to be installed. Even today with various small cranes and hydraulic lifting equipment available, to remove an old boiler from a plant room and install another big boiler in its place is a very tough task to undertake.

Generally, the bigger boilers came in sizeable sections that you would transport down to the plant room before having to bolt them all together to form a large assembly.

This would be a very physically demanding job for the installer. Also, to compound this, many boiler houses were in the basement or cellar, unlike modern buildings today where a dedicated plant room is part of the planning.

A cascade of multiple boilers is much easier to install into a plant room. When combined they are heavy, but the installer can take them to the plant room individually. This splits the weight without needing to take the boiler apart and reassemble it.

In the past, the reliance on that one boiler was quite essential. If it broke down or failed, you would have to include a really good support service, otherwise the building would be forced to close temporarily while the problem was resolved. If this was a hospital or a clinic, this would be impossible. If it was a restaurant, bar, or hotel, then the owners would be losing business.

However, with a boiler cascade, if one fails then it is unlikely that users will notice a difference in terms of heat and hot water. As an installer, this means you no longer need to fear an emergency callout in the middle of the night requiring you to sort out the problem.

In fact, many public premises – such as health clinics, and public and private hospitals – won’t allow you to fit just one appliance because of the danger of being without heat if it breaks down. So, learning how to successfully install a cascade is a major advantage if you work in this area.

Manufacturer support
Installing a cascade of boilers is becoming a typical job for the modern installer to undertake, and manufacturers now ensure they make the right equipment and tools to facilitate this. In days gone by, the installer had to make many of these themselves, such as mounting frames, support brackets, and low-loss headers.

Today, manufacturers are more aware of time constraints and skill shortages, so they develop these for the installer. You can buy what you require to assemble the cascade effectively.

Although it is becoming more common for installers to work with cascades, it is still an area many don’t operate in, meaning there’s less competition. With that in mind, you can argue that there are more opportunities for work and, in turn, more profit, especially if you operate in an affluent area.

For example, if you’ve noticed numerous enquiries from large property owners or businesses, then assess how wide the market might be in your area. Even more so if you know there aren’t many local commercial installers around. You may find that other small commercial premises, such as guest houses, pubs, or restaurants, may also be struggling to find installers.

It may require a bit of time and effort, but there are opportunities out there for entreprenurial installers looking for more commercial work.

BOILER BOSCH CASCADE COMMERCIAL CONDENSING HEATING INSTALLATION INSTALLER MODERN PETE MILLS PLANT ROOM
Tweets by HVP
Make sure you’re on top of changes in the industry, and sign up for free to receive your monthly copy of HVP and our weekly email newsletter
SUBSCRIBE TO NEWSLETTER
SUBSCRIBE TO MAGAZINE