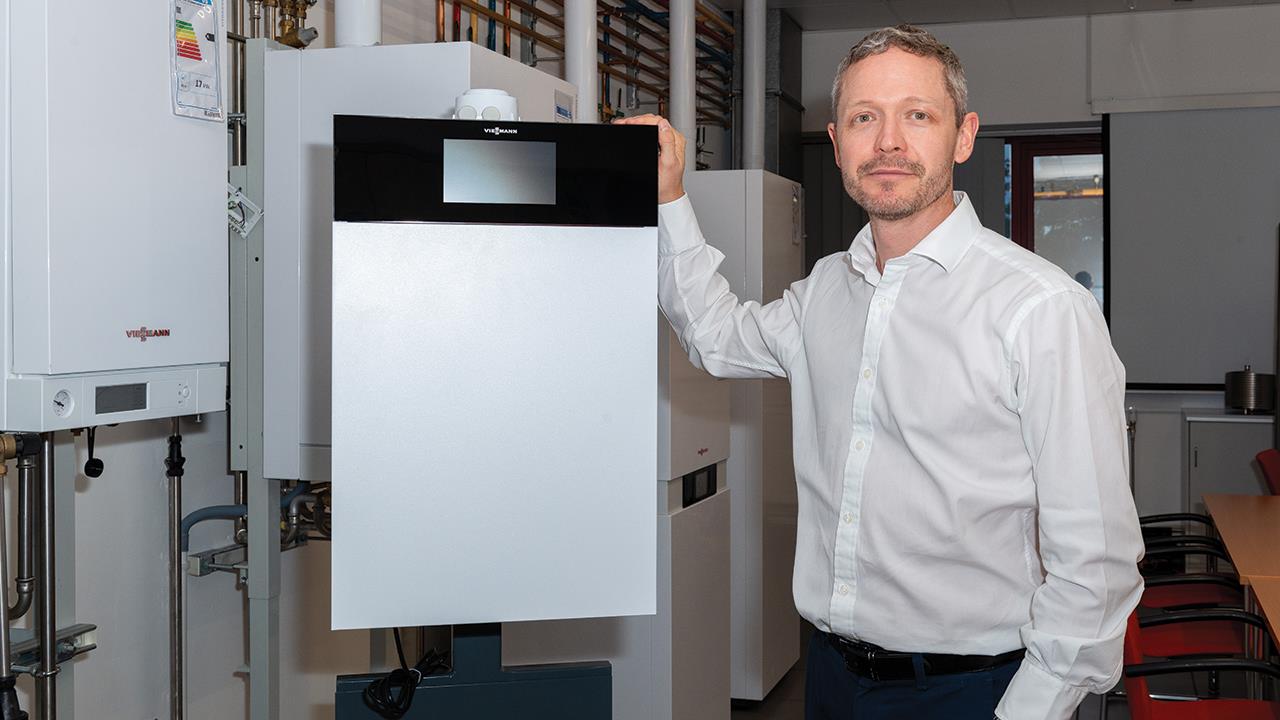 Installers often specify boilers that are larger than necessary. Darren McMahon, Marketing Director at Viessmann, explains why this is undesirable.

When specifying boiler size, it’s time for a rethink. There is a widespread tendency in the UK to oversize boilers and it is a bad habit to just replace on a like-for-like basis.

It’s understandable that installers should prefer to equip a building with too much, rather than too little potential heating power, but the kilowatt requirement is often exaggerated due to rule of thumb methods, such as heat output calculation +10%.

Historically, boilers were oversized because we programmed our heating to come on twice a day. The boiler was expected to heat the house very quickly in the morning. With houses more effectively insulated nowadays, and with less heat lost overnight, there is no need for such overheating in the morning to reach the target temperature.

Most modern homes’ heat demand is actually very modest. The average heat loss for a UK property is no more than 6-8kW. However, as insulation materials in buildings improved, overheating has become widespread.

Even the UK’s older housing stock, with its poorer insulation and higher levels of heat loss, is typically equipped with boilers that are too big. This is daft. If red hot radiators cannot consume all the kilowatts the boiler is able to pump out and more flowing hot water than is needed is being produced, the buyer is paying more than necessary. This isn’t the only way in which oversizing is wasteful.

It is true that combi boilers are typically oversized for the building’s central heating because there are times when the boiler has to instantly provide hot water. The higher the flow rate desired for the hot water, the higher the required boiler output. The hot water flow rate isn’t so critical when sizing system boilers, however, because they preheat and then store the water in a cylinder.

For this reason, system boilers can be sized lower than combi boilers – but most system boiler ranges start at an output of around 19kW. It’s not difficult to imagine 19kW boilers being installed where 10kW would be sufficient for heating.

That’s why Viessmann’s new Vitodens 200 domestic boiler range includes a system boiler with a maximum heating output of just 11kW, which modulates down to 1.9kW. That doesn’t sound like much but, for many homes, 11kW will be enough.

This is something installers have recognised for some years now in Viessmann’s homeland, Germany, where smaller output units are common and customers are happy with the results.

11kW will not be enough for every type of dwelling, but the feasibility of such a low output reminds us that heat loss calculations need only be realistic, not overstated. There’s no need to specify a slightly bigger boiler than the heat loss calculation dictates, ‘just in case’.

The excuse of fitting an oversized boiler as ‘futureproofing’, just in case the house’s floor area should get extended at some point, makes no sense unless there’s a high probability the extension will be enormous, or hot water demand will increase massively.

Heat loss calculations err on the side of caution anyway, because they allow for exceptionally low outside temperatures of -1 to -3°C and for maximum simultaneous demand for heat and hot water.

Boilers can also be oversized, often unintentionally, when replacing old with new but, remember, the boiler being replaced may itself have been oversized. It’s also possible that the heat load of the property has reduced since that boiler was installed, due to measures such as double glazing, loft insulation, or cavity insulation.

Getting domestic boiler sizing right doesn’t only save the customer from the equivalent of buying a 200mph sportscar for pootling around town. Another good reason for accurate sizing is that an oversized boiler will be prone to short cycling, running uninterrupted for shorter periods of time, and cycling on and off more frequently, because it cannot dissipate the heat it is generating quickly enough.

The boiler is least efficient when firing up, losing fuel during ignition cycles and having some heat extracted from the heat exchanger with every flue purge. Frequent on/off cycling increases fuel costs, greenhouse gas emissions, and wear and tear on components.

A correctly sized boiler will also have the benefit of being less costly, meaning customers are not paying more for materials. Other indirect benefits are that circulating pumps are sized to the boiler output and thus are less noisy and more cost effective to run.

In short, it’s well worth double checking what boiler size is really needed, and resisting the temptation to oversize.

By doing this, you’ll make the heating system smoother, better balanced, more efficient, more economical to run, and less damaging to the environment. Size is everything, but bigger isn’t better in this case.