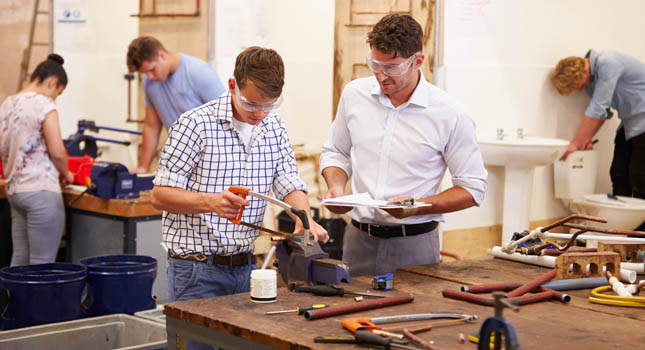 The government's flagship apprenticeships policies have a worrying lack of focus and will not fill widening skills gaps unless they concentrate on sectors and regions where training is most needed, according to a report released on 30 March.

The Sub-Committee on Education, Skills and the Economy argued that the government's Apprenticeship Levy, to be introduced in the first week of April, and a target of three million 'starts' by the end of the Parliament, are ‘blunt instruments’ that risk being unduly focused on simply raising participation levels.

The Committee says the government should instead place far greater emphasis on outcomes, judging success of apprenticeships by whether individual apprentices secure employment, for example.

Ministers should look to how apprenticeships can help close the skills gap, including by restructuring the levy on a sectoral and regional basis. The Committee also points to concerns that the three million target could hamper attempts to raise quality of provision.

The report highlights tension between the government's desire to give employers more control over the system and its attempts to use apprenticeships to increase social mobility. The Committee also warns that schools are still failing to promote non-university routes.

Neil Carmichael MP, Co-Chair of the Sub-Committee on Education, Skills and the Economy, said: "Apprenticeships are vital if we are to close the skills gap, which could grow wider post-Brexit. We must train our young people for jobs that the economy needs, but the government has failed to show how its three million target and levy will help achieve this.

“Ministers must recognise that apprenticeships are a means to an end and not an end in themselves. They need to place greater emphasis on outcomes, focussing on areas of the economy where training is most needed, and ensuring quantity does not trump quality.

“For too long apprenticeships have been seen as inferior to the university route and failed to benefit young people from disadvantages backgrounds. We fully support the government's attempts to improve the prestige of apprenticeships, but it will take more than words to achieve this aim. If the quality is there the prestige will follow."

The Committee recommends the government publishes an annual report setting out the skills shortages on a national, regional and sector-specific basis and set clear targets to ensure that uptake of apprenticeships in these areas is prioritised.

The report also urges the government to produce an annual survey of performance against clear outcome measures such as completions, progressions to higher levels and relevant employment secured. Official figures show just 67% of apprenticeships were completed in 2015 to 16.

The report welcomes the creation of the Institute for Apprenticeships, which it expects will play a major role in improving quality in the future. However it cautions that the new body must be given sufficient capacity and independence if it is to succeed.

It also calls for more support for apprentices themselves, which could include changes to the benefits system, more subsidised fares on public transport or even direct financial support such as bursaries.

The Committee welcomes the government's commitment to apprenticeships and supports the aims of its reforms to increase the number of apprentices and improve the quality of the training.

The full list of recommendations can be viewed here: https://www.publications.parliament.uk/pa/cm201617/cmselect/cmese/206/20610.htm.